Two brave children who have been receiving chemotherapy at Barnet Hospital became the first patients to ring a special bell to commemorate the end of their treatment.

Ertac Yusuf, eight,  from Bush Hill Park, Enfield, and Zara Yurtseven, 11, from Cockfosters, were both diagnosed with leukaemia, forcing them to undergo several years of chemotherapy to fight the disease. 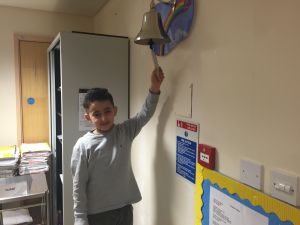 On Wednesday 24 February both children finished their final cycle of treatment, and to commemorate the life-changing moment staff from the paediatric oncology team at Barnet Hospital have installed an ‘end of treatment’ bell for all young patients to ring at the end of their course.

It was donated to the hospital by End of Treatment Bells, an organisation that provides bells to children’s oncology wards throughout the country.

Lynne Riley, consultant paediatrician at BH, said: “Finishing chemotherapy is a huge moment in a child’s life and we wanted a way of marking it and making it an exciting thing. They will continue to have follow-up appointments, but it is still a life-changing event for the child and the child’s family.”

Kate Owen, lead nurse for paediatric oncology, added: “Treatment for leukaemia can last for more than three years, so young children might not even remember what life was like before they started the chemotherapy. Ringing the bell marks the moment when, hopefully, they can try to begin to move on with their lives.” 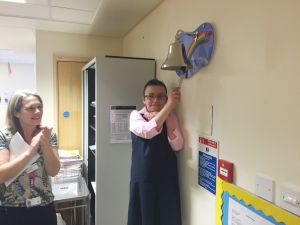 Zara, who started her chemotherapy two years ago, said: “When I started my treatment I wasn’t really aware of what was happening. But I became more aware in the middle, so I’m really excited to finish and be able to ring the bell.”

Her father Bill added: “The bell is a great idea. It’s something so small but it’s not at the same time because it acknowledges that sense of achievement.”

Ertac underwent three and a half years of chemotherapy, visiting first Chase Farm Hospital and then Barnet Hospital every four weeks.

His mother Derya said: “It feels so good that this is finally finished and there is a light at the end of the tunnel. It has been really hard; our whole life has been focused around Ertac’s treatment. He has two siblings and their lives have been affected by this too.

“When he was first diagnosed he was very unwell and we thought there was no hope, but after a year or so things really started to improve. The staff here and at Chase Farm have been a miracle and the bell is brilliant. Watching Ertac ringing it brings this all to a close.”

Watch our video and see our young patients ring the 'end of treatment' bell (duration 1:37)