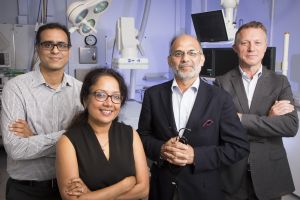 A team of radiologists and chest physicians who introduced a new and more efficient lung biopsy method at Barnet Hospital (BH) have been shortlisted for an NHS innovation award.

The team’s innovative ambulatory lung biopsy service enables the vast majority of patients to be discharged just 30 minutes after the biopsy. The method also allows biopsy patients who suffer a collapsed lung to be treated at home as out-patients.

In most hospitals throughout the NHS and the rest of the world, patients who undergo even routine lung biopsies are admitted to hospital and remain in a hospital bed for four to six hours in order to monitor for lung collapse (pneumothorax).

However, patients that experience pneumothorax at Barnet Hospital are treated with a small, compact device called the Heimlich valve chest drain (HVCD), instead of a traditional bulky chest drain. The portable device allows those patients to leave hospital almost immediately and treat their collapsed lung safely and effectively at home.

Researchers suggest the new method, which has never been used in Europe before, could free up hundreds of hospital beds while also allowing more patients to undergo diagnostic biopsy in a much shorter space of time, leading to earlier lung cancer diagnoses. The new method also allows clinicians to biopsy patients who would usually not be eligible for the procedure due to the high risk of lung collapse.

While most hospitals of equivalent size to Barnet Hospital expect to do around 40 biopsies each year, thanks to the new method BH expects to have performed around 300 between April 2015 and April 2016. Currently, BH is the only European hospital using the early discharge/out-patient HVCD method. However, NHS England is now looking into how it could be adopted by hospitals across the capital and the rest of the UK.

The team, which is led by Dr Sam Hare, consultant thoracic radiologist and radiology lead, has now been shortlisted for an NHS Innovation Challenge Prize in the ‘cancer care’ category.

The prizes seek to encourage, recognise and reward front line innovation and drive adoption of these innovations across the NHS. The team will be asked to present the lung biopsy project to a team of judges later this month.

Dr Hare said: “It is a tremendous honour for our work to be recognised by the shortlisting panel. Our overwhelming feeling is that driving adoption of this innovation across the NHS will be a game changer for the UK lung cancer landscape by providing earlier diagnosis in more patients. We are driven to do our utmost to win the award so that the current ‘Barnet Hospital model’ can shape a better future for lung cancer patients throughout the NHS.”