An award-winning team of Royal Free London radiologists and respiratory consultants who pioneered a faster, more efficient lung biopsy method has been handed another gong by the British Institute of Radiology (BIR). 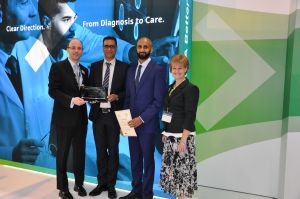 Barnet Hospital’s ambulatory lung biopsy team won the BIR/Bayer Make it Better Award which was presented at the UK Radiology Congress in Liverpool on Wednesday 8 June.

Their innovative ambulatory lung biopsy service enables the vast majority of Royal Free London patients to be discharged just 30 minutes after their biopsy. The method also allows biopsy patients who suffer a collapsed lung to be treated at home as out-patients. In most hospitals throughout the NHS and the rest of the world, patients who undergo even routine lung biopsies are admitted to a hospital bed and remain in hospital for four to six hours to be monitored for lung collapse (pneumothorax).

The relatively small number of Barnet Hospital patients that experience pneumothorax are treated with a small, compact device called the Heimlich valve chest drain, instead of a traditional bulky chest drain. While the existing system would see those patients admitted for up to two days, the portable device allows them to leave hospital almost immediately and treat their collapsed lung themselves, safely and effectively at home.

At Barnet Hospital this has resulted in a huge increase in productivity. Since 2011, clinicians have performed nearly 800 out-patient lung biopsies, including 216 in the last six months. The national average for similar hospitals is 30 to 40 per year. Of those 800 patients, 99% were discharged within an hour of undergoing the biopsy.

The ambulatory biopsy team has already won the British Medical Journal’s ‘Cancer Care Team of the Year’ award, as well as the NHS Innovations Challenge Prize for cancer treatment. The team is now working with NHS England to set up a training course, with the aim of eventually rolling out the method across the country.

Dr Sam Hare said “We are thrilled to have received this award and look forward to sharing our work so that this system becomes standard practice in other trusts”.

The award was sponsored by Bayer Healthcare UK.

Andreas Ackermann, the company’s UK divisional head of radiology, said “It is a great honour to support this award which goes to a team who are making a real difference to the hospital experience for people with lung cancer. We hope the publicity about this award will help to encourage other hospitals to take on this ground-breaking protocol.”