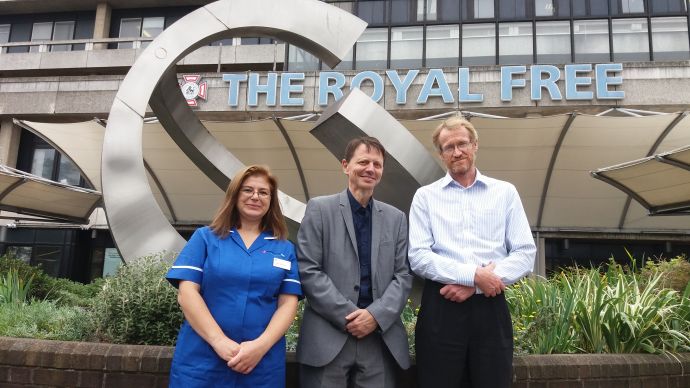 Patients who were part of a ground-breaking trial conducted at the Royal Free Hospital are benefitting from a new treatment aimed at tackling hereditary amyloidosis, a rare, life-threatening disease.

Based on Nobel Prize winning science, patisiran (ONPATTRO™) offers a lifeline for patients with hereditary transthyretin amyloidosis (hATTR), a progressive, disabling and usually fatal disease, caused by accumulation of abnormal amyloid protein deposits in the nerves, heart and elsewhere in the body.

The European Commission has granted marketing authorisation for patisiran, offering hope to patients, who until now could only be treated for the symptoms rather than the cause of the disease. Patisiran has also been submitted for appraisal by the National Institute for Health and Care Excellence (NICE) and guidance is likely to be issued in 2019.

Many serious, chronic and life-threatening diseases, such as hATTR amyloidosis, are caused by mutations that interfere with the way the body manufactures proteins. RNA interference (RNAi) works by targeting specific genes and inhibiting production of abnormal proteins that cause disease. The expectation going forward is that RNAi may be adapted to tackle many other conditions.

Carlos Heras-Palou, 53, a surgeon based at the Royal Derby Hospital, knew that the disorder ran in his family and so when his symptoms began, including numbness and pins and needles in his feet, he strongly suspected he had the disease, which led to early diagnosis and his participation in the patisiran trial and, subsequently, an early access to medicines scheme.

Mr Heras-Palou currently visits the National Amyloidosis Centre, based at the Royal Free Hospital, in London, every three weeks for his infusion treatment.

The father-of-two said: “The treatment means I can still work and as long as I’m careful I can still have a reasonable quality of life. This treatment gives hope to patients with the disease and for the next generation. I certainly feel I’m not getting any worse and I actually feel like I’m getting a bit better, but any improvement will be slow as it takes time for the nerves to heal.

“This new treatment changes the outlook of the disease for the first time – it’s a beautiful message. It’s a scientific discovery that will save lives.”

Left untreated the disease affects nerves controlling the digestive system, leading to constipation and diarrhoea. As damage to nerves and the heart progresses patients are left unable to stand or walk and their eyesight also fails. Life expectancy from diagnosis is seven to 10 years.

Professor Philip Hawkins, head of the National Amyloidosis Centre, said: “Until now, a lack of treatments to halt or reverse progression of the disease, resulted in a gradual and relentless decline in the day-to-day functioning of patients, resulting in severe disability, placing a heavy burden not just on the patient themselves but on their partners and families.

“Patisiran has the potential not only to transform these patients’ lives but to change the way in which we think about and treat hATTR amyloidosis and other diseases. This is a true milestone and we believe this will be a highly effective therapy.”