The NLBSS, which is part of the Royal Free London, aims to provide breast cancer screening to women aged 47 or over once every three years. 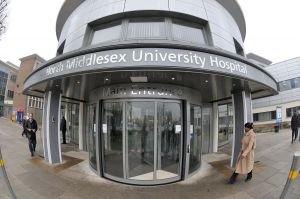 The mobile unit was based outside the main entrance of NMUH in Sterling Way, Edmonton, for around 18 months. During this time every woman living in the area who was due to be screened was invited to visit the unit.

The NHS breast screening programme was launched in 1988 with the aim of detecting breast cancer at an earlier stage, often before the woman is aware of any problem. Early detection may mean simpler and more successful treatment. Scientific evidence shows that regular breast screening between the ages of 50 - 70 years reduces the death rate from breast cancer. The age range of women invited was extended to include some 47 to 49 year old women and some 71 to 73 year old women, as recommended by the Cancer Reform Strategy.

Kathy Murphy, acting superintendent radiographer at the NLBSS, said: “We parked one of our mobile screening units in the North Mid car park to enable us to screen the local women at a site convenient to them. The unit was set up at the front of the hospital and has proved very popular with our patients and was very easy for them to find.

“We look forward to returning to in approximately 18 months.”

Jasdeep Gahir, consultant breast surgeon at NMUH, said: “It has been great to have the mobile breast screening unit parked right in front of the hospital. It means local women have been able get their mammograms done close to home and if a cancerous lump is detected following further tests, the patients can quickly see a breast consultant at the hospital and be offered excellent service and treatment to deal with it.”