A paediatric consultant at Barnet Hospital is the brains behind a website aimed at helping parents of young children and babies avoid and spot the signs of bronchiolitis. 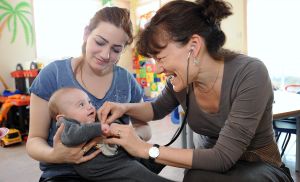 Dr Su Laurent wrote the content for the website in order to increase awareness of the condition, which causes inflammation of the small airways in the lungs called the bronchioles making it more difficult for the child to breathe. Although it is often no more serious than a common cold, bronchiolitis is the most cause for infants being admitted to hospital in the UK.

Dr Laurent wrote the content for morethanacold.co.uk after she was approached by pharmaceutical company, Abbvie.

She said: “Bronchiolitis is a very common illness in babies which a lot of parents don’t know about. The website is firstly intended to point those parents towards the condition if their child is unwell, but it’s also gives guidance to parents on how they can avoid their child getting it.”

As well as providing information and answering questions about the condition, the site also features testimonials and video interviews with parents whose children have had bronchiolitis.

Dr Laurent, who has also contributed to Department of Health guidance on infant healthcare, added: “Parents who come to see me have often Googled symptoms before they even come in and when I tell them what’s wrong they go away and Google that.