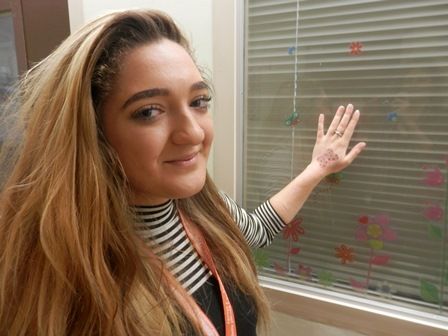 Patients, staff and supporters at the Royal Free Hospital in London will be joining forces on Twitter to show their support for Eating Disorders Week (27 February – 5 March).

This week patients at the hospital’s eating disorder intensive service, staff and supporters are decorating their hands with butterfly wings and using the hashtag #FREEthebutterfly. The campaign aims to support those living with the condition and dispel common myths about  eating disorders.

The campaign was the brainchild of Royal Free patients last year and it is hoped even more people will take part to help raise awareness by drawing a butterfly on their hands and tweeting a picture of it with their location.

The Royal Free’s eating disorder service for young people is one of the largest in the country and covers Islington, Barnet, Enfield, Haringey and Camden. A key aim of the service is to try to help young people avoid being admitted onto an eating disorder unit and instead treat them outside of hospital, enabling them to live as normal a life as possible.

“This campaign is all about challenging the myths of eating disorders and getting people to understand a little bit more about what is a really about,” says Victoria Chapman, a consultant child and adolescent psychiatrist at the Royal Free Hospital.

“We think the most important thing is that young people with an eating disorder are treated with compassion and that we listen to the needs of our patients and their families. Last year the butterfly hashtag reached as far afield as Spain, China and the United States and we hope it will go even further this year so we can spread this important message.”

Lucy Paraskeva, 19, from north London, used to be a patient at the Royal Free for her eating disorder. She is now in recovery, is about to study psychology at university and regularly volunteers with young patients at the unit. This year she is helping to organise the #FREEthebutterfly campaign.  She said: “There is a real lack of awareness about eating disorders and what it takes to tackle them. Staff at the Royal Free were incredibly supportive and motivating and I’m keen to help spread the message – if we can encourage people to talk about this illness we can help families spot it as early as possible and get their children the help they need.”