The doctor behind the ‘Hello my name is…’ campaign, which calls on clinicians to introduce themselves to patients, has spoken to A&E staff at the Royal Free Hospital about patient care. 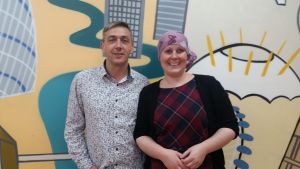 When Dr Kate Granger was diagnosed with cancer four years ago, many of the clinicians treating her did not introduce themselves, which she said made her feel isolated. So in 2013 Kate started a campaign to encourage healthcare staff to introduce themselves to their patients before delivering care.

It wasn’t long before the ‘Hello my name is…’ campaign gained national and even international support. The Royal Free London supported the start of the official national campaign in February, when NHS trusts across the country all pledged to encourage their staff to tell patients their names.

Kate was invited to speak to A&E nurses last month so she could explain why she started her campaign.

“I had a lot of time waiting around and thinking about what makes a good nurse or a good doctor,” said Kate. “It was just so important to know someone’s name and their role. I am clinician so depending on who it was I would give them a different history. The importance of someone introducing themselves before doing something to me, something intimate to my body, I can’t understate it.

“Lots of people who had been treating me did not introduce themselves and I was feeling scared and alone. Then Brian came along – he introduced himself and told me he was going to look after me – I can’t tell you how pleased I was to hear that and what a difference Brian made to me just by saying that.”

Kate said it was important to not to be seen as just a disease or a bed number. She explained: “Someone has said to me, ‘bed number seven, would you like a cup of tea?’ It can be so lonely in hospital, even though there are lots of people around, to be just a number or a disease is not good for your self-esteem.”

Kate said that telling patients your name is something that benefits staff as well as patients. “Just think how proud you feel when someone sends you a thank you letter,” she said. “If they don’t know your name they can’t thank you.”

Richard Pomphrey, emergency department matron at the Royal Free Hospital, added: “Listening to Kate was so inspiring and it was so valuable for our staff to hear why introducing yourself can mean so much to patients. Kate helped us to think about how vulnerable you can feel as a patient and how small acts of kindness can make a big difference.”

You can support Dr Granger’s campaign on Twitter by tweeting the hashtag #hellomynameis followed by your name, job title and where you work. To find about more about the campaign, visit www.hellomynameis.org.uk/home or follow Kate on Twitter at @GrangerKate.