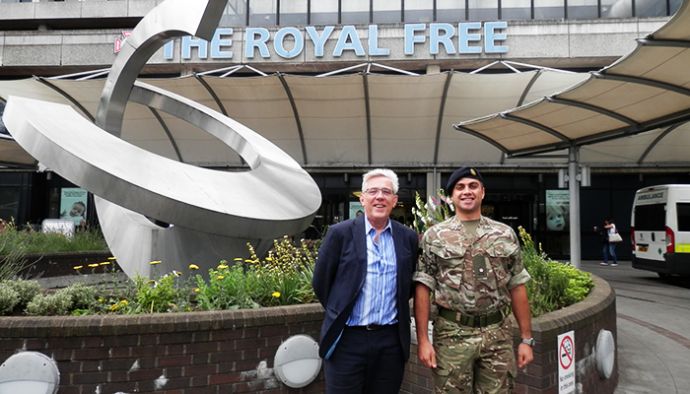 Today, the Royal Free NHS Foundation Trust is joining many other employers across the UK to celebrate Reserves Day. On this day we show support to reservists who give up their spare time to serve in the Reserve Forces, balancing their civilian life with a military career to ensure that should their country require them, they would be ready to serve as part of the military.

One of our reservists, Saif Ramman, is a plastic surgeon with a specialty interest in limb reconstruction.

The work he does varies from day to day. He could be in clinic or treating patients who have been referred from the emergency department or other hospitals with anything from hand fractures, tendon and nerve injuries as well as lower limb wounds. He also performs elective work such as breast surgery reconstruction, facial reanimation or skin cancer work.

Saif is a commissioned officer with the rank of Major at 256 (City of London) Field Hospital. Once a week he trains in his army unit doing a combination of physical training, military skills and clinical or army related lectures.

It was incredibly physically and mentally demanding. I thought I could already work under stress because of my job as a surgeon but you tend to function very differently when you are cold, wet, hungry and haven’t slept. It has really taught me how to achieve the very best with the minimum as well as getting straight to the point and making decisions quickly

There are no immediate plans for deployment but if that were to change the Army would look at their personnel requirements. Mr. Ramman might be deployed to operate in hospitals in the UK with specialist capacity like Queen Elizabeth in Birmingham or Frimley Park in Surrey (which would see casualties evacuated from a war zone) or he could be deployed closer to the front line with his unit.