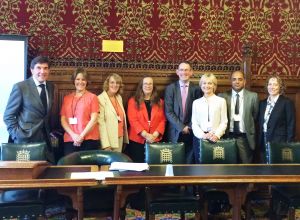 Betty Hutchon, head paediatric occupational therapist at the Royal Free Hospital, has contributed to a parliamentary inquiry into the early identification of cerebral palsy.

Betty, who is also a consultant neurodevelopmental therapist at UCLH and an honorary lecturer at University College London, was invited to the House of Commons on 27 January. She joined Nicky Morgan, education secretary and minister for women and equalities, and John Bercow, speaker of the house, to celebrate the launch of the report.

Specialising in the neurodevelopment of babies and young children, Betty has built the neurodevelopment assessment service for pre-term and high risk infants at the Royal Free Hospital alongside Dr Vivienne Van Someren, consultant paediatrician and associate medical director. The service, which has now been established for more than 15 years, is regarded as the ‘gold’ standard for neurodevelopmental follow-up for all high risk infants and has been extended to UCLH and the Whittington and Barnet Hospitals.

In September 2014 Betty was approached by Action Cerebral Palsy, a consortium of 15 UK specialist centres and a registered charity, to contribute to a parliamentary inquiry on cerebral palsy. The inquiry was set up to identify the policy changes needed to ensure all children with cerebral palsy received good quality early support and the very best start in life. Currently there are no national guidelines for the early identification of cerebral palsy and services vary hugely across the UK.

As a consultant therapist Betty uses diagnostic and evidence-based neurological and developmental assessments to accurately identify the early signs of cerebral palsy. Betty presented this evidence to the inquiry in November, showing video evidence of her patients which demonstrated that the early identification of cerebral palsy is possible using Prechtl’s general movement technique. She also presented recent research on the evidence for early brain plasticity and the importance of early intervention to help the brain ‘rewire’ damaged areas.

The report of the parliamentary inquiry into cerebral palsy was launched at a reception on 27 January, referencing Betty and the Royal Free London.