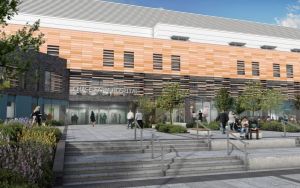 The multi-million pound redevelopment of Chase Farm Hospital has received the final go-ahead.

The government has approved the full business case submitted by the Royal Free London NHS Foundation Trust which will allow the redevelopment of Chase Farm Hospital, creating a state of the art facility delivering 21st century healthcare to the local population.

Government approval of the full business case means public funds can now be released; in total the government is set to contribute almost £82 million towards the redevelopment, with the shortfall being met by the sale of surplus land and the funds invested by the Royal Free London.

David Sloman, chief executive of the trust, said: “With the final approval of the full business case, our plans to deliver a secure future and vastly improved facilities for Chase Farm Hospital can now become a reality.

“It is a great achievement to have reached this point so quickly. I would like to thank all those who have helped to get us here, including staff, local and national politicians and supportive members of the local community as well as those who have worked in partnership with us to develop the full business case.”

“I now look forward to seeing the new hospital taking shape over the next two years.”

Construction work will start in the next few weeks. Enabling works to prepare the site (including demolition of unused buildings and alterations to some of the internal roads) have been ongoing since last year.

We are carefully planning the development so that all services remain operational throughout construction and disruption to patients and the local community is minimised.

The Royal Free London is working with a number of companies during the redevelopment of Chase Farm Hospital: primary contractor Integrated Health Projects, financial advisers Turner and Townsend, equipment advisers MTS and planning advisers Montague Evans. Sweett Group were appointed in May 2014 to provide programme management services for the redevelopment, including the generation of a full business case in partnership with the trust.

More information on the redevelopment is available at www.royalfree.nhs.uk/chasefarm