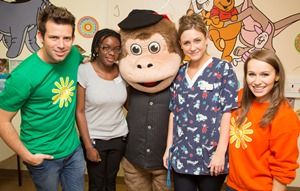 The team behind Channel 5’s Milkshake paid a visit to the children’s ward at the Royal Free Hospital earlier this month.

On 13 November children at the hospital were treated to a performance from the stars of the show, including the Milkshake Monkey, who sang about his love for bananas, and presenters Derek and Jen, who showed off their impressive dance moves.

They also brought along goody bags, toys and signed cards from the Milkshake team, which were handed out to all children on the ward.

Abbi Spurdle, play assistant at the trust, said: “All the children enjoyed themselves so much. They loved the performances from the Milkshake gang and it was a really fun afternoon for everyone on the ward!”