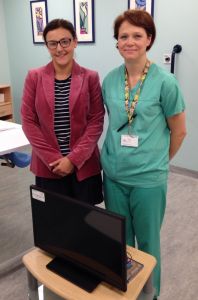 The north and east London group of Sands, the national stillbirth and neonatal death charity, have used funds raised by local families to improve the facilities for bereaved families at Barnet Hospital.

Sands offer support to anyone affected by the death of a baby before, during or shortly after birth. They work closely with local healthcare organisations to improve the care given to bereaved parents and offering emotional support and information for those affected by the bereavement. They cover the areas of Hackney, Islington, Camden, Haringey, Enfield, Tower Hamlets and Newham.

In September funds raised by local families were used to provide a TV for the older children of bereaved parents in the bereavement suite located in the maternity unit at Barnet Hospital.

Maria Huant, head of hospital liaison for north and east London Sands, said: “We hope that the TV will entertain the bereaved families’ young siblings while their parents spend time with their baby, make some important decisions and welcome relatives who may visit them.”

Angela Hawes, bereavement midwife at Barnet Hospital, said: “We are grateful to Sands for the donation of a TV for the bereavement room which will help improve the environment in the bereavement suite. We hope to make bereaved parents feel a bit more at home and to help make memories that will sustain them through their loss.”