A cancer patient at the Royal Free London (RFL) is organising a fund-raising event as a thank you for the care he has received in the past two years. 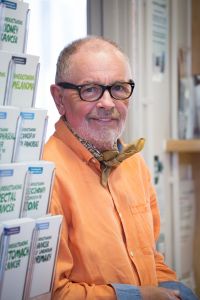 Steve Couldridge, who runs a balloon company in Mill Hill, is holding the event at The Haven restaurant in Whetstone next month. The evening will feature a cabaret band and a number of raffles and games to raise money for the Royal Free Charity. All funds from the event will go towards research into new treatments for skin and lung cancer, and for the training of oncology staff.

Steve, 67, from Borehamwood, was diagnosed with skin cancer in 2013. He is now on the road to recovery after receiving treatment at all three of the RFL’s hospitals – Barnet, Chase Farm and the Royal Free - demonstrating how staff throughout the trust have been working together to provide the best care for our patients.

In April 2013 he developed what looked like bruising under his arm and his GP referred him to Barnet Hospital and then Chase Farm, where it was discovered that the bruising was, in fact, skin cancer, which had spread to his lymph nodes.

“The event is a way to say thanks to the plastic surgeons and oncologists who give so much to so many,” he said.

“The treatment and attention I have received has without doubt been on par with private medical care, and my ambition is to put a little something back into the trust, particularly into research for new cancer treatments.”

His charity event will be held on 20 September. Although the tickets are sold out, if you would like to make a contribution to the fund, email Steve on itsallblow@hotmail.co.uk.