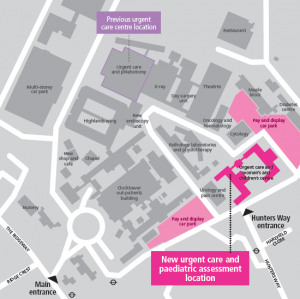 The urgent care centre at Chase Farm Hospital is due to move tonight (4 August) to its new location opposite the Hunters Way entrance to the site.

A number of services, including the older person’s assessment unit and the blood test clinic, have already been relocated elsewhere on site. These moves are required to make room for building work on the multi-million pound new hospital proposed by the Royal Free London NHS Foundation Trust.

The urgent care centre, which provides a walk-in service for minor illness and injuries such as sprains, strains and broken bones, will remain open during the normal hours (8am to 10pm) throughout the move.

Fiona Jackson, Chase Farm Hospital director, said “We want to assure everyone that the urgent care centre is open as usual, and will continue to provide a valuable walk-in service for local people.”

Once the urgent care centre has moved, it will remain in place until it is due to move into the proposed new building, planned to open in spring 2018.

More information on the service moves this summer can be found on the trust’s website: www.royalfree.nhs.uk/chasefarm.