Children being treated on Galaxy ward were greeted by a mountain of chocolate eggs on Wednesday 23 March following the Easter collection by the neighbouring care home. 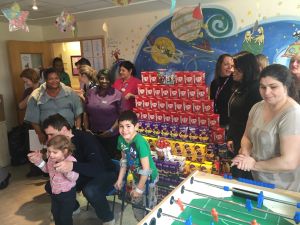 Carlton Court received donations from its residents, as well as local businesses, including Thomas Ridley, JA Clark and Sons and Churchill.

Hazel Norris, paediatric matron on Galaxy ward, said: “We just want to say a big ‘thank you’ to everyone who donated Easter eggs to Galaxy ward. Hospitals aren’t always a lot of fun, especially for a child, so it really brightens the children’s day when they receive a treat. They’re delighted with them.”

Samantha Davis, whose 2-year-old daughter Catalena has been recovering from an operation on her ear, said: “It’s a really lovely gift. It’s nice for the kids to be able to take their minds of their treatment and just eat some chocolate. It’s a nice treat for them.”

Manj Uppal, community development manager at Carlton Court, said: “The team at Carlton Court, together with the community around us, wanted to help bring a smile to the faces of the children in Barnet Hospital. This is our way of wishing all the children, and their families, an extra special happy Easter with some yummy chocolate.”