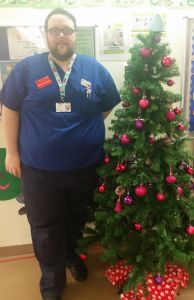 While most people will be tucking into a turkey lunch on Christmas Day, many members of staff at the Royal Free London will be hard at work, caring for patients and keeping our hospitals running.

Karl Piller, a junior charge nurse on the children’s ward at the Royal Free Hospital, will be trying to his best to make patients have a very merry time on Christmas morning.

“We will be giving presents to all the children in the morning,” said Karl “We’ve got loads of presents that have been donated by various people and we’ve been wrapping them all up for the past few days.

“We’ve been doing our best to get patients home for Christmas, if appropriate, but for those who are here, we will be trying to make it as nice as we can for them. It will be a fun day.”

Karl said the team takes in turns to work over the Christmas period. “When we become nurses we all know we will sometimes have to work over Christmas – it’s part of the job. And we need to be there for our patients who can’t be at home.”

Chris Ellis, an emergency department assistant at the urgent care centre at Chase Farm Hospital, is at work from 10am-10pm on both Christmas Day and Boxing Day.

“It’s a bit quieter over Christmas,” said Chris. “However, you still have some people coming in for routine things. We get some Christmas-related injuries, like kids who’ve crashed their new bike or their skateboard. We also get people with cooking injuries, which they’ve picked up when making Christmas lunch.”

Chris, who has worked at the urgent care centre for 14 years, said he would be spending Christmas morning with his family before starting his 12 hour shift. “It’s part of working in an urgent care centre, so I don’t really mind coming in to work,” he added.

Mandy Simpson, a junior sister on Larch ward at Barnet Hospital, said: “It will be busy on Christmas Day – we try to make it a jolly atmosphere.  Nobody wants to be in hospital over Christmas but it’s a lovely environment in Larch Ward, as it’s just been completely refurbished to make it dementia-friendly.”