Dr Nick Murch, consultant in acute medicine at the Royal Free London, has become the fifth person in the world and only the second person in the UK to successfully swim Lake Geneva. 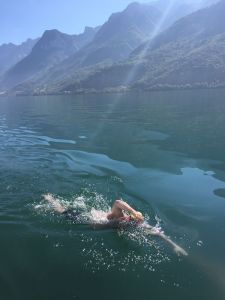 Nick, who swam the English Channel earlier in the year, finished Lake Geneva, a 73 kilometre swim, in 32 hours 46 minutes and 33 seconds.

Nick said: “It is probably the most difficult thing I have ever done. There were some times where I thought I could not go on, especially after the 10th hour, when I developed a pain in my right shoulder and the current had picked up. The judging is really harsh, so you can’t touch the boat which makes it difficult to get any rest.

“My team were amazing; they kept me going and gave me hot drinks to stop me from freezing in the water. My social media was blowing up and it was great to hear all the support.

“I trained for about 12 months for the swim; the English Channel swim was practically a training session compared to Geneva. At the end of it I was shattered, I could barely move and even now I am still recovering.

“My mother grew up in Switzerland and she used to tell me stories about how she swam in the lakes, so this was always something I wanted to do. I’m proud to say I am in an exclusive group of people who have completed this.”