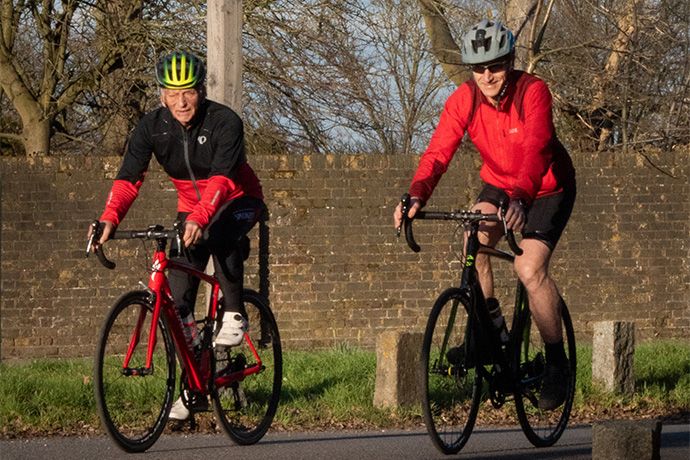 A patient who has already donated £3,000 to Barnet Hospital to thank staff who saved his life has teamed up with a neighbour for a cycling challenge which has already raised a further £6,500 for the hospital.

Gary Colet, 62, and Jeff Ward, 68, from Mill Hill in north west London, will cycle 52.4  miles – the distance of the London to Brighton cycle ride - on 17 April, although because of COVID restrictions they will do the ride in Hertfordshire, cycling past Barnet Hospital at about 1pm.

They want to thank the staff at Barnet Hospital for caring for Gary after he contracted COVID-19 and the cancer centre at Guy’s Hospital for treating Jeff’s rare form of skin cancer.

In March 2020, Gary Colet contracted COVID-19 and was admitted to Barnet Hospital, remaining there for the next three months, including five weeks on a ventilator.

On returning home, Gary had lost a third of his body weight. Recovery was gruelling, but by getting back to his passion of cycling, and encouraged by his neighbour, he started to gain strength.

“My recovery is now progressing much faster than anyone expected, including me,” said Gary. “It was really tough, mentally as well as physically, to adhere to my rigorous exercise regime. I can now eat normally and have put back on 22 of the 25 kilos I lost and feel really well.

“I continue to have breathing problems from lung fibrosis and it has taken nearly a year to get partial feeling back in my feet. None of this has stopped me doing anything and I am now cycling about 150 miles per week. I've also restarted mountain biking. I feel lucky to have emerged a stronger person having experienced the worst that Covid-19 can do to the human body.”

He said that he and his wife had wanted to do something immediately on his discharge to thank the staff on the intensive care unit at Barnet and donated £3,000 for an information mural for patients.

He added that cycling with Jeff had made all the difference, especially on days when it was harder to get going. “Having that commitment and encouragement from a riding buddy has been so helpful. On many occasions Jeff disappeared up Barnet Hill, while I crawled slowly up, breathing hard but refusing to get off.  Over time, I got fitter and Jeff's chemotherapy has kicked-in. So now it's my turn to be a motivator.”

You can donate to Gary’s fund here