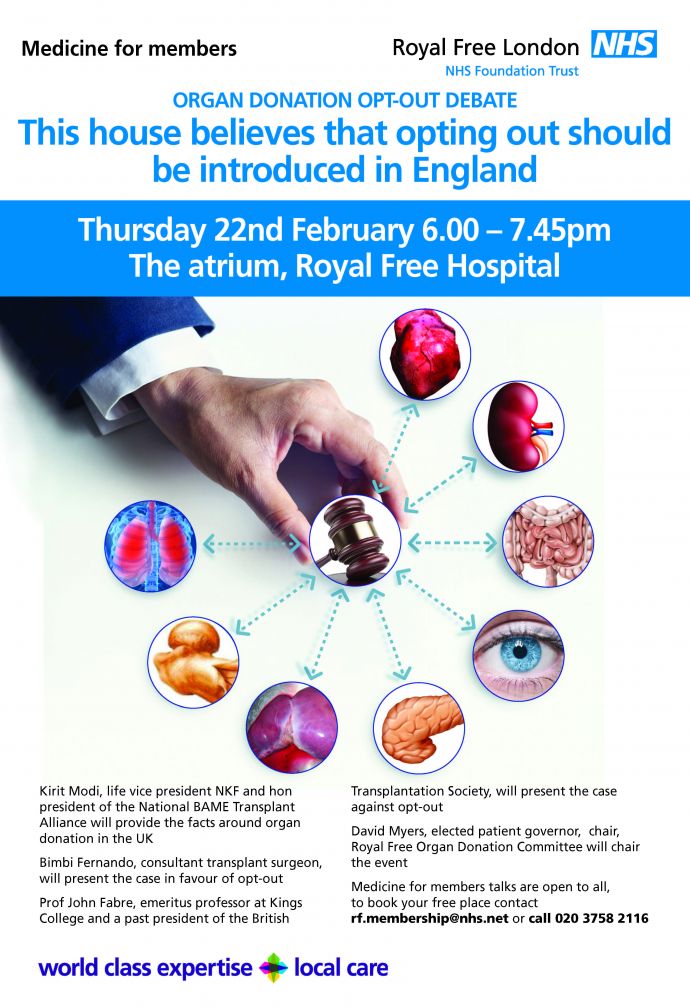 Visitors to the Royal Free London’s latest Medicine for Members event, held at the Royal Free Hospital, were treated to a topical debate on the issue of organ donation opt-out.

The Royal Free Hospital is one of the country’s leading transplant hospitals and during the Medicine for Members event, guests were told about the government’s current proposal to change the law regarding organ donation. Under the proposed new system, you would be considered a donor unless you indicate you do not wish to be.

The debate attracted a large audience that listened to three speakers, followed by a lively question and answer session.

David Myers, patient governor and chair of the Royal Free London organ donation committee, chaired the debate. He said: “There is an urgent need for more people to agree to donate. There are 6,500 patients awaiting an organ with 5,500 of them waiting for a kidney. Sadly, around three people die every day in the UK in need of an organ while more than 1,000 families say no to organ donation every year.”

One of the speakers, Kirit Modi, life vice president of the National Kidney Federation (NKF) and honorary president of the National BAME Transplant Alliance (the coordinating voice for black, Asian and minority ethnic transplant donation), said: “We are not making sufficient progress in increasing organ donors in England and patients are dying while waiting for an organ.

“Introducing opting out will make a significant contribution to helping change the culture for donation so that it becomes normal to donate organs. The NKF has a long-standing policy of supporting opting out and we are looking forward to contributing to the establishment of opting out in England.”

Bimbi Fernando, consultant transplant surgeon at the Royal Free Hospital, spoke in favour of the opt-out proposal. He said: “We have seen steady improvements over the last ten years in organ donation rates yet there is still a gap between supply and demand of organs for transplantation, resulting in many hundreds dying each year on the waiting list.

“Opting out legislation will allow us to focus on education and awareness programmes to allow people to not only make an informed decision about this sensitive area but to share that decision with their family members. This will have the biggest impact on reducing that gap and will hopefully save many lives in the future.”

Professor John Fabre, emeritus professor at Kings College and a past president of the British Transplantation Society, presented the case against opt-out arguing that it would not help to solve the problem with donor shortages.

Both sides of the discussion agreed it was crucial that education starts in schools where children can learn about organ donation and discuss with parents and family members. The panel also agreed that the government needs to plan efficiently to allow for more resources for supporting education, information and training of clinicians and nursing staff.

To find out more about Medicine for Members events go here.