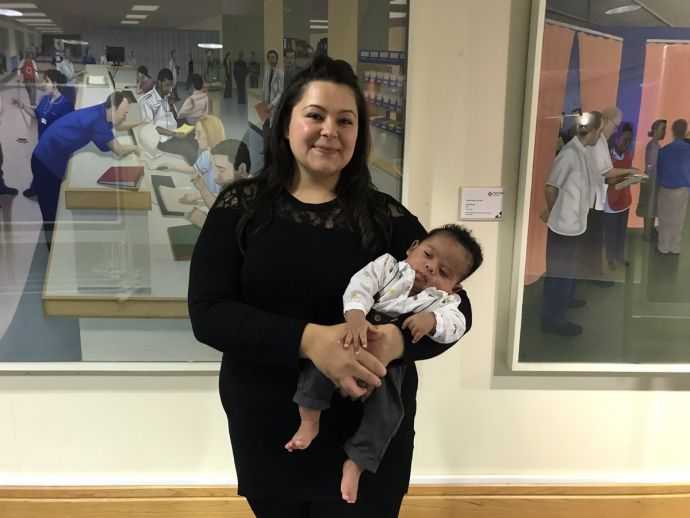 Patients at the Royal Free London (RFL) are having a direct impact on the way their healthcare is delivered, resulting in better care.

That was the positive message from last night’s Medicine for Members lecture, ‘Pathways to better health’.

Katerina Christodoulou, who had given birth at Edgware Birth Centre, just nine weeks ago, attended the event with her baby, Jason. She told the audience that being able to have continuous care with a designated midwife had enabled her to have an incredibly positive experience.

She said: “I actually suffer from paranoia about hospitals and was almost convinced I would go private. But being able to have a named midwife with me from the start to the finish means I plan to have all my babies with the NHS! It’s restored my trust. I think this new approach will also have other benefits like reducing incidents of post-natal depression.”

Cathy Rogers, the consultant midwife who is leading on the ‘Better birth pathway’ explained that listening to their patients was at the core of the new pathway, which included introducing named midwives.

She said: “As midwives we do the job because we care but we also made assumptions about what women wanted. When we talked to mums-to-be and to midwives we actually found out there was a lot of common ground. Our surveys and focus groups told us that women didn’t want to see lots of different staff, what they wanted was continuity and a relationship with a named midwife.”

Dr Chris Streather, RFL group chief medical officer, told members that the work on new patient pathways – the way a patient is treated for a particular health issues - was based on best practice and the latest clinical evidence.

He said: “This is the most significant piece of work the trust is undertaking. The aim is to reduce variation, which in turn gives us the opportunity to improve quality and deliver benefits for patients, staff and the system.”

John Connolly,  RFL group director of clinical pathways and consultant nephrologist, said the first pathways to be focused on were those that were ‘high volume activities’ or ‘low volume but very costly and complex’.

He said: “We analysed all the clinical outcomes and these were the ones we really wanted to tackle straight away. We also looked at national audits and what our patients were saying.

“We were very clear that the redesign needed to be around the patient, not what suited the hospital or staff.”

The team held focus groups with patients and encouraged them to keep diaries in which they shared their stories and even scored their emotional journeys.

She said: “It really hit home for me when a patient told us, ‘Meeting your baby for the first time in a clear plastic box is the most frightening experience of your life’.”

Out of the stories they shared came a solution. Some premature babies who needed that bit of extra care and attention with feeding and monitoring could in fact stay with their parents, but they would need to wear an orange hat so that staff knew they needed more help.

Shanthi explains: “There was an initial concern from staff who thought families might not like the orange hats, as it might make them feel stigmatised, but in fact the very opposite was the case. Families have told us it makes them feel special and reassured because they don’t need to feel worried about asking for extra support because they know that’s what their baby needs.

“Also the fantastic thing about the pathway is it isn’t set in stone. We get continuous patient feedback and that means we can keep changing things in ‘real-time’.”

The new approach has paid off with over 100 families to date able to stay together instead of their baby being admitted to the neo-natal intensive care unit.

Dr Streather concluded: “We will be looking at 44 pathways in the first three years and we think that we will deliver savings of approximately half a million pounds on each through actually improving the patient experience and removing waste. That’s 20 million pounds that we can spend on our patients.”