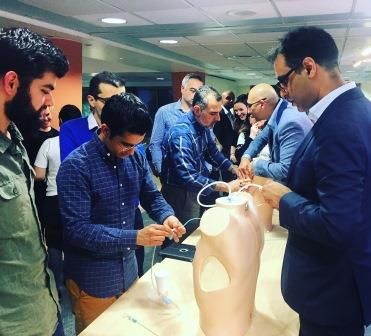 Clinicians from across the UK gathered at the Royal Free London (RFL) to learn more about its ground-breaking techniques for lung cancer – including a biopsy which allows most patients to return home after just half-an-hour.

The RFL hosted its second pulmonary oncology, biopsy and ablation symposium (POBAS)  to support clinicians to implement the technique at their hospitals.

The funding was awarded to develop the training programme for ambulatory lung biopsy and assist with the implementation of the method for trusts in North, Central and East London.

The innovative method enables the vast majority of patients to be discharged just 30 minutes after their biopsy and those who suffer a collapsed lung to be treated at home as out-patients.

These patients are treated with a small, compact device called the Heimlich valve chest drain (HVCD), instead of a traditional bulky chest drain. In most hospitals throughout the NHS and the rest of the world, patients who undergo even routine lung biopsies are admitted to a hospital bed and remain in hospital for four to six hours to be monitored for lung collapse (pneumothorax).

The Royal Free London NHS Foundation Trust was the first in the UK to perform the innovative method at Barnet Hospital in 2012 and has since supported over 15 trusts throughout the UK with implementation.

The work of Barnet Hospital’s radiology team has been recognised with a number of awards including the 2016 NHS Innovation Cancer Challenge, BMJ Cancer Care Team of the Year and HSJ acute sector innovation awards.

It was organised by Dr Sam Hare, who leads the lung cancer imaging team at Barnet Hospital and Dr Ash Saini, consultant radiologist and clinical director of imaging. Dr Hare and a range of other speakers discussed techniques and patient pathways in detail to share best practice. The course, which attracted 40 clinicians, also included a ‘hands on’ demonstration workshop showing the portable chest drains that improve patient experience in the event of post biopsy pneumothorax.

Since its introduction in November 2016 the course has been attended by 38 NHS organisations across the UK, with many looking to implement the innovative technique.