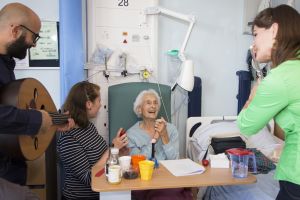 Dementia specialists from the Royal Free London will be joined by representatives from Age UK and Alzheimer’s Society at a dementia advice session at the Royal Free Hospital this Friday afternoon.

People affected by dementia and their carers will be able to speak to doctors, nurses and other experts about the condition and the support available at NHS hospitals.

Services available to patients with dementia, such as the memory clinic, pets as therapy and massage therapy, will be on show throughout the afternoon. There will also be a dementia café, which offers a safe and supportive environment for people with dementia and music by musicians from the Guildhall School of Music.

The event will also see the official launch of the a dementia advisory service, which will see the trust, Alzheimer’s Society and Age UK run bi-monthly clinics at the Royal Free Hospital.

Danielle Wilde, dementia lead at the Royal Free London, said: “There are more than 7 million unpaid carers in the UK and engaging with and meeting the needs of these people is the foundation of any successful dementia strategy. This event sets out our commitment to people with dementia and is a celebration of the value we place on carers.”

The event will take place on Friday 12 February, 4-6pm, in the Sir William Wells Atrium, the Royal Free Hospital.

Complimentary tea and cake will be served.