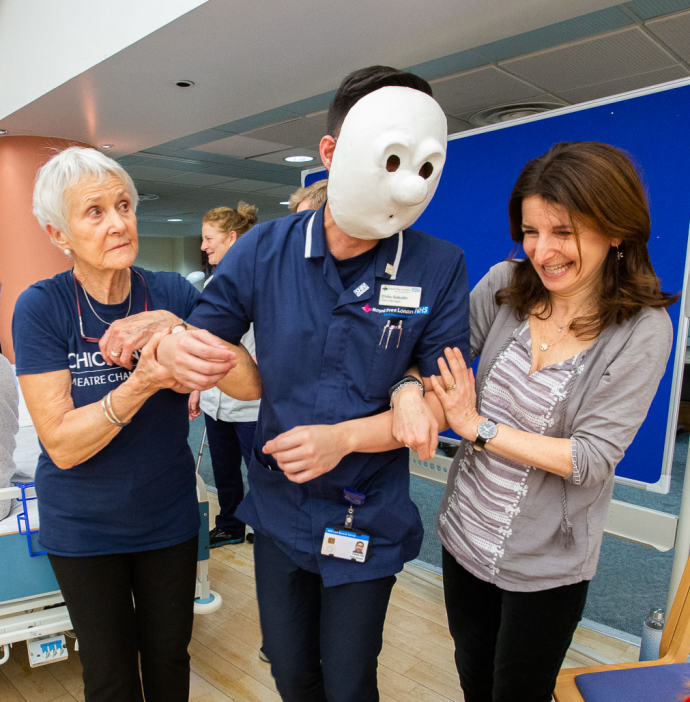 Over 100 members of staff from across the Royal Free London (RFL) took part in an inspirational day of dementia training with a difference: role-playing with actors from theatre company Chickenshed.

Staff, including nurses, porters, therapists, cleaners and security guards, participated in workshops and exercises developed by the RFL’s dementia specialists, with help from the inclusive theatre company.

Chickenshed actors, some whom have relatives with dementia, and trust staff took turns acting out and role-playing fictional scenarios involving dementia patients. The workshops, funded by the Royal Free Charity, were called ‘Navigating the Twilight’.

Danielle Wilde, RFL group dementia lead, said: “The education and training of our workforce is essential to changing how we care for our patients.

“But a lot of training focuses on disease, diagnosis and medical interventions and often this doesn’t help us understand how to talk to somebody with dementia or develop a mutual understanding of their needs.

“Sometimes, because we wear the uniform and the name badge, we think we should know all the answers. We think we know what patients need and we think that what they need is the truth and hard fact.

“Many of our patients live in altered realities and our efforts should be directed at making their reality feel safe wherever it happens to exist. It they don’t know the day, the year, the name of the prime minister it doesn’t matter. The truth is not a cure for dementia. The purpose of the training is to give our staff some other options when speaking to patients who exist in different realities to us.”

Andauna Gough, a nursing assistant at Barnet Hospital, said she had found the workshop ‘invaluable’.

“It helped me to put myself in the shoes of the patient, to think to take time to talk to them and understand them and how to make them comfortable,” she said.

Nadeem Jokhoo, a security officer at the Royal Free Hospital, said that working with the Chickenshed actors had been inspiring.

“It has helped me to think about how I communicate with patients both verbally and non-verbally and how communication can be projected through body language.”

Pete Dowse, one of Chickenshed’s creative producer’s, said: “We are an inclusive theatre company and our actors come from a range of different backgrounds so it has been a great opportunity to work with the RFL on designing these interactive workshops which are aimed at giving dementia patients a voice and making sure staff don’t just hear the expert voice.

“Dementia as a disease comes with a stigma attached to it - some of the actors here today have direct experience of dementia as their family members have the disease so they can understand.”

Alison Bowman, head of support hubs for the Royal Free Charity, said: “I thought this was a wonderful collaboration between the dementia team, led by Danielle Wilde, the charity and Chickenshed.
“The training was really successful - the feedback from staff has been incredible. Everyone who took part said they would recommend it to colleagues and they have also said they feel significantly more confident about caring for a patient with dementia.

“One of the charity’s priorities is to support care for patients with long-term conditions, including dementia, and we are interested in funding innovative approaches to care, so we were really pleased to be able to support this work.”