A Royal Free London occupational therapist who wrote a comprehensive guide for health workers on treating people with dementia has been nominated for a national Patient Safety Award. 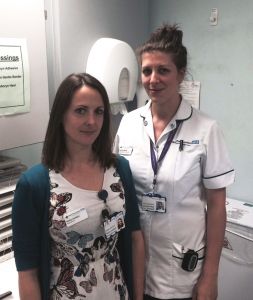 The book was based on the OT team’s April 2013 my discharge project, which was funded by the Health Foundation and saw the appointment of the trust’s first dementia occupational therapist.

Danielle, who took over the role in January 2014, said: “The aim was to have a specialist OT to make sure we got the discharge process right for dementia patients and focussed on safe transfer of care from hospital into the community.

“The OT really gets to know the patient, they really get to know the family. It is really just about getting discharge right for them”.

After a short time the project began yielding results. After treating 100 patients the length of stay was reduced by an average of two and a half days, with 85% of those patients going straight home. It was also noted that 30 of those patients who had been at risk of admission to a nursing home, were instead supported back to their own homes.

After being left unable to perform her clinical duties due to her back injury, Danielle started writing a guide for her colleagues who would be picking up her caseload for patients with complex issues associated with their dementia.

She said: “As I started writing it and doing more research, I started thinking that this was probably something that could be used across the NHS as a sort of gold standard for people who care for dementia patients.

“I wanted to put all the reflections, about how we could achieve these results, down on paper, so I came up with the dementia toolkit.

“It outlines a model of care for working with people with dementia; how to make meaningful assessments of patients, work alongside and advocate for patients and their families, and how to give people as much independence as possible at hospital and at home.

“It’s also vital to identify problems early and come up with solutions as a team, and make sure the right information is going to the right people. Those are really the guiding principles of a successful intervention for people with dementia.

“I think this toolkit is something that could be used by anyone.”

One in three people over 65 will develop dementia, and one in four NHS hospital beds is believed to be occupied by a patient with the condition.

Becky Lambert, who held the role of dementia specialist OT before becoming the trust’s dementia lead, said the toolkit could be used as a guide for any NHS staff who work with dementia patients, ensuring they receive world class care wherever they are in the hospital.

She said: “The dementia specialist occupational therapist works closely with people with dementia, their families and carers, but with 289 patients with dementia admitted to the trust per month, it isn’t possible for OT to carry the case load for all of these patients.

“It was about identifying what we did so well, and how we could teach the process in a way that is manageable and systematic. This means that if a dementia specialist isn’t available, everything doesn’t suddenly fall by the way side and staff dealing with patients with dementia have a model of care they can follow in order to achieve the same positive outcome.

“This is about sharing the learning and about empowering our staff to make dementia care excellent for all patients.”

On the award nomination Danielle said: “I feel very excited. It’s really nice to have that acknowledgement for all that work and it is really great that people recognise that it is a good piece of work. Now I would just like it to be spread as far as possible.”

The team has now received further funding from the Health Foundation to disseminate the work across the trust, expanding it to all health professionals and to other trusts across the country.

Read about other ways we are raising the profile of dementia at the trust.