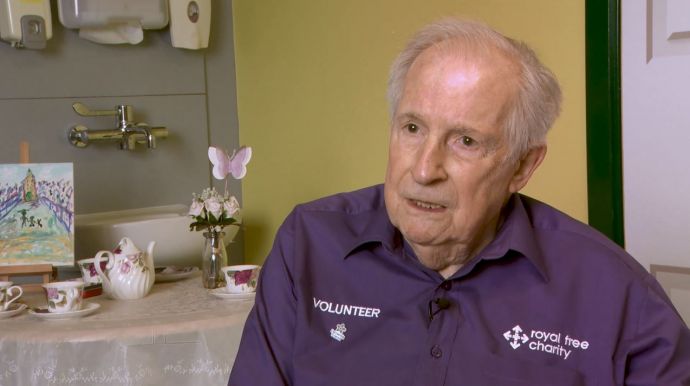 Royal Free Charity volunteer John Gaunt has been honoured for his tireless work as a dementia companion at the Royal Free London NHS Foundation Trust.

At this week’s Daily Mail Health Hero Awards, Prime Minister Theresa May thanked John for his commitment to supporting those in need.

John, 89, spends two days a week as a volunteer on the dementia ward at the Royal Free Hospital.  It's demanding work, requiring skill and kindness which John dispenses by the bucketload, combined with a dedication and energy that make him unique, say his colleagues — and it's why they nominated him for the award.

They described how John goes to great lengths to treat each patient as an individual, thoroughly researching their background to pull out information that might help him bring back memories and connect with that person.

He uses skills like listening, talking, singing and even dancing — whatever it takes to put patients at ease.

“His charisma and charm truly brighten up the ward,” said Danielle Wilde, the Trust’s group lead for dementia lead.  “John is one of the most interesting and energetic colleagues I have ever worked with and the staff look forward to his visits as much as the patients do,” she added.

Richard Scarth, Royal Free Charity director of operations nominated John for the award.  "He’s simply the best,” said Richard who is responsible for the Royal Free Charity's 900 volunteers. “I get more positive feedback about John than anyone.”

John arrives for his shift at 9am and although he should clock off at 1pm is often still working late into the afternoon.

“I’m not going to dash off home just because my shift is over,’ he said.  "I go when I feel I have done what I can with my patients.”