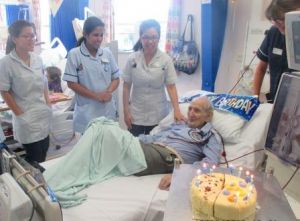 Sidney Benjamin, from Finchley, is thought to be one of the oldest people in the country to be receiving dialysis treatment. He has been on dialysis for the past eight years after his kidney deteriorated at the age of 96.

The nurses in the renal unit bought balloons and a birthday cake to help him celebrate.

Kate Shaw, ward sister at the renal unit at Barnet Hospital, said: “It’s been a pleasure and a privilege to look after Sidney - he is true gentleman. It must be a world record – having dialysis at 104 and he is still going strong!

“He is very easy to look after – he has three hours of dialysis three times a week, he never complains.”

Mr Benjamin repaired watches and clocks for a living – a job he started at the age of 14 and continued until he was 98. He worked as an engineer with the RAF during World War II. He has outlived his son, two wives and his siblings and is now supported by a carer.

Image: Sidney Benjamin with the nurses on the renal unit at Barnet Hospital