A retired publisher says that donating her kidney to a stranger has opened up a host of new opportunities and she hopes her experience might encourage others to consider donating.

To mark organ donation week this week Celia Kent, from Tufnell Park, has shared her story and explained why she decided to give one of her kidneys to someone she had never met before. 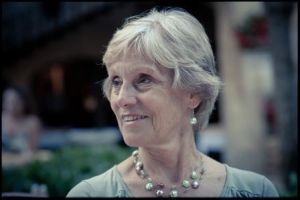 She said: “I read an article about altruistic donation, as it is called. Until then, I didn’t know it was something that you could do,” she said. “I’ve often donated blood and have also donated bone marrow. When I read about donating a kidney, it stayed with me and I thought it was something that I could do.”

Celia approached the Royal Free Hospital and met with specialist nurse Catherine O’Malley who explained the process to her. Celia had to go through a range of physical and psychological tests so doctors knew she was fit enough to undergo the operation.

“Once I had made the decision I just wanted to get on with it, I found the whole process very interesting,” said Celia. “They asked me what my reasons for doing it were – I think they just wanted to make sure I was doing it for the right reasons.

“I can’t really explain why I wanted to do it - it was just something that I could do and I saw it as a challenge. Once I started I wanted to get over the next hurdle. I was 70 when I did it and I didn’t want to fail the test. They go to great lengths to make sure that you are fit enough and I would’ve been gutted if I had failed at any point; it was almost competitive. I never really waivered in my determination to do it.

“Obviously there are risks but I don’t live my life thinking like that – otherwise you would never do anything. You can’t live on ifs and buts and I had absolute confidence in the surgical team who were doing the operation.”

Following the removal of her kidney Celia made a full recovery and her life soon returned to normal – she continues to go to the gym, to climb, to go water-skiing and do all the physical activities she did previously. But donating a kidney has also opened up new opportunities for her.

She said: “I am now working with the charity Give a Kidney, which supports people through the altruistic kidney donation process. I am an ambassador for them and help them review the services that different NHS organisations offer kidney transplant patients. I had a mentor who previously donated a kidney and she talked me through the process. We are still friendly now and sing in the same choir.

“So donating the kidney has had a greater effect on me overall. Although it is called altruistic donation, it has not been without its benefits to me. I realise it is not everybody can or should do this – but I am keen to let people know that there is this opportunity out there.”

If you are interested in becoming an altruistic kidney donor please contact the Royal Free Hospital’s live kidney donor nurses on 020 7317 7604.

Organ donation week runs from 5-11 September. If you would like to join the organ donor register visit www.organdonation.nhs.uk or call 0300 123 23 23. Share your decision with your friends, using the hashtag #YesIDonate.