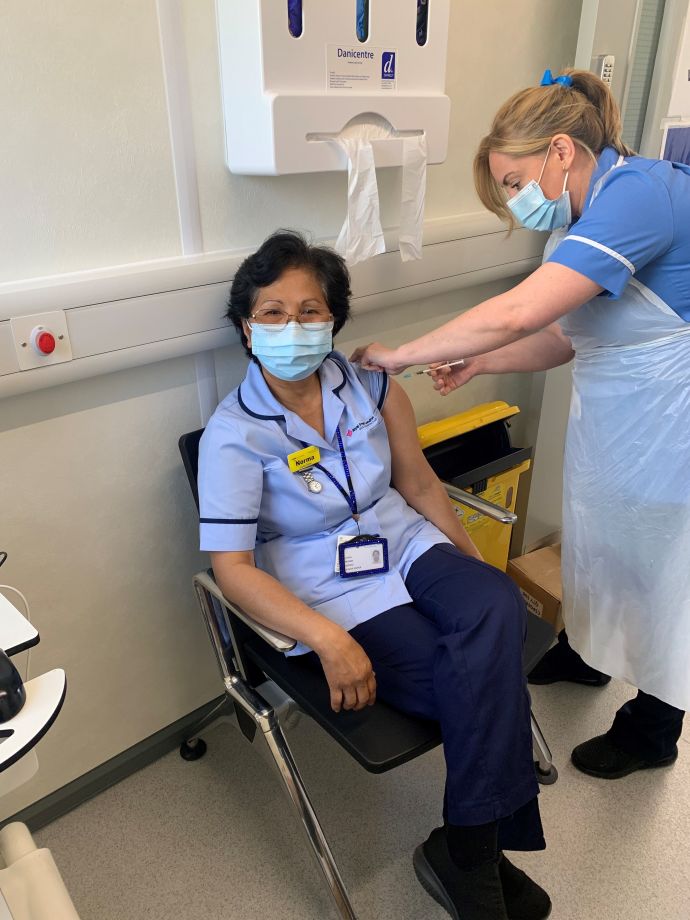 Junior sister Norma Berido is urging all staff to book their winter vaccinations as soon as possible. Norma has more reason than most to advocate for vaccines after spending 21 days last year fighting for her life in her own hospital, as a result of COVID-19.

Norma, who now works in ambulatory emergency care (AEC) was delighted to be one of the first members of staff at Barnet Hospital to receive her booster COVID-19 and flu jab at the end of September.

Norma, who has been a nurse for 42 years, 32 of them at Barnet Hospital, said: “I jumped at the chance to get my vaccines as last year I spent three weeks here recovering from the virus. I never want to go through something like that ever again.”

She adds: “If you have the chance to get vaccinated do it. Protect yourself, your patients, your colleagues and your loved ones. Believe me you don’t want to experience being this ill.”

It was the end of March last year when Norma started feeling unwell on a shift with a headache and nausea and a colleague advised her to go home.

For the next eight days Norma battled the virus. She had a high temperature and a severe headache which even paracetamol didn’t alleviate. Finally, as she realised she was struggling to breathe, she took the decision to go to Barnet Hospital ED.

She said: “When I arrived I had what they call ‘happy hypoxia’,” explains Norma. “I was still talking but the oxygen saturation levels were so low in my blood that the staff knew I was very unwell. They quickly started to get to work as my brain began to fog and I just went blank.”

Norma spent a short time on Rowan and Spruce wards where she was now a patient instead of a nurse. She said: “It was strange being in the bed and seeing all the doctors, many of who I’d known since they were ‘baby’ doctors, long before they became consultants. Now they were looking after me.”

Eventually the decision was made that Norma must go to ITU because she wasn’t getting any better.

She said: “I was the only one ‘awake’ in ITU. Over the next couple of days the people both sides of me died and the person opposite me died. I suffer from claustrophobia and couldn’t handle CPAP, where air is sent through a tube into a mask that fits over the nose, so I was placed on BiPAP which I seemed to tolerate better. It was very difficult for me because I wanted to get up and help but all I could do was accept I was now a patient.”

Finally Norma was considered well enough to return back to the wards and she was adamant she was going to leave hospital and be reunited with her husband.

She said: “At the beginning it was very difficult. I was so weak I couldn’t even reach for a bottle of water or go to the bathroom. But I could see the sun and the leaves outside the window and I was resolved to get out and get home.”

Norma was eventually discharged but it was to be a further four and a half months before she was well enough to return to work. Even now she suffers from symptoms of long COVID such as joint pain and shortness of breath.

She said: “At first I couldn’t imagine being back at work but in the end it drove me mad being at home. I’m a workaholic and I really missed my patients and my colleagues. The one concession I’ve made is to switch from the wards, including the adult ambulatory unit to AEC as it’s not so physically strenuous, which helps me with my energy levels.”

Norma added: “Please, please listen to me and get your vaccines. Don’t be complacent.”