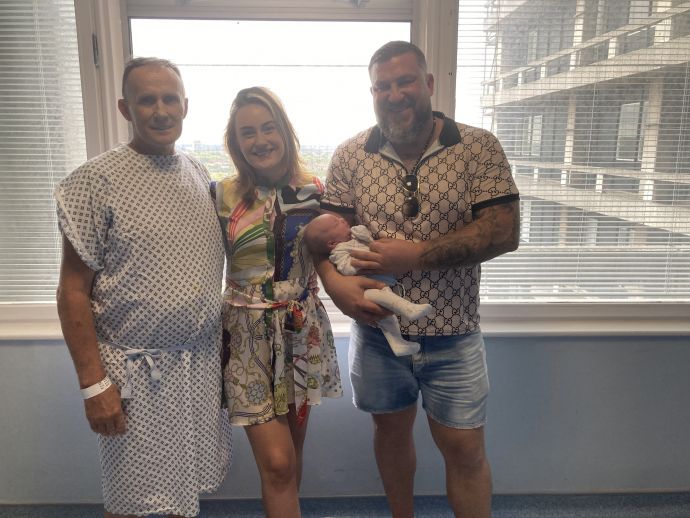 A patient at the Royal Free Hospital is enjoying a double celebration after he received a liver transplant on the same day as he became a grandfather for the second time.

Remi says she is over the moon that her father has been given a new lease of life at the same time as her daughter was born in Peterborough City Hospital.

“At 8am dad’s surgeon called to say his surgery was finished and had been successful,” said Remi. “I told him I’m having the baby now and then half an hour later she was born. She is such a good baby, she is an angel.

“You can’t plan for these things – sometimes it just happens. Eliza is Dad’s first granddaughter, he already has a grandson, my six-year-old son Nojus. We are all delighted – I feel like he’s been given a second chance of life.”

Remi said her dad’s transplant journey has been an emotional rollercoaster.

“From the moment we knew he had to have a new liver and then waiting on the list – I can’t really put it into words,” she said. “Three times previously Dad was called into the hospital for the surgery, but the livers were found to be unsuitable for transplant. So finally it has happened and we are so happy because now he will get to see his grandchildren grow up.”

Remigijus is now recovering from his surgery at home in South Ockendon, Essex. He said he was hugely grateful for his new liver and was thrilled with his new granddaughter Eliza.

Remi added: “My partner Zydrunas and I would like to thank each and every one of the liver transplant team who have been helping to look after my dad, they are all amazing.

“And we would also like to say thank to you the family of the donor for giving my dad a second chance at life, no words could ever be enough to express our gratitude.”

Professor Joerg-Matthais Pollok, consultant liver transplant surgeon, said: “We’re all so pleased that Remigijus is recovering well from his surgery. It’s wonderful news that his new granddaughter was born on the same day – that really was perfect timing.”