Darren Cutinha, a consultant child and adolescent psychiatrist at the Royal Free Hospital, spoke to the BBC on Wednesday about why the number of young people with an eating disorder who are admitted to hospital has risen in the past three years. 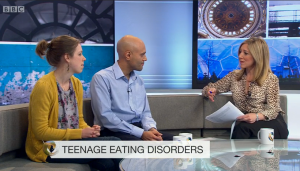 Speaking on the Victoria Derbyshire show on Wednesday morning, Darren said: “At the Royal Free we have one of the largest eating disorder services in the country. Teamwork is really crucial in treating young people with eating disorders. Large specialist eating disorder services, that are community-based with a range of different professionals who provide different treatments are what is needed. The involvement of the family is really important. All the evidence shows that the more involvement from parents there is the better the outcomes.”

Darren was also interviewed on the Afternoon Edition on Radio 5 Live. He said: “These young people should be treated by specialist eating disorder services in the community. Our service at the Royal Free is an example of that. We have a large multi-disciplinary team, working very closely together, including paediatric colleagues, nurses, family therapists, psychologists and psychiatrists.

“We can help young people where they need to be, which is at home and at school. If you want to know what helps young people get better, it’s that combination of really good treating team, who have lots of experience, but also having contact with real life and to be in contact with their families and friends and school.”

You can watch Darren on the Victoria Derbyshire show and listen to him on the Afternoon Edition on Radio 5 Live.

Image: Darren speaking on the Victoria Derbyshire show with Kat Pugh, a young ambassasor from the eating disorder charity Beat, and Joanna Gosling, the presenter.