A patient at the Royal Free London has nominated a nurse for an award after she supported her through her battle with an eating disorder.

Sarah Duffy, a paediatric nurse, is one of four finalists shortlisted in the Royal College of Nursing’s RCNi Patient’s Choice Award. 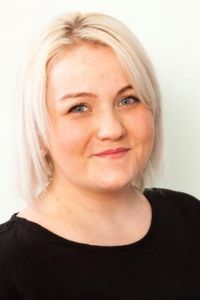 Jade, 14, nominated Sarah because of the care and kindness she showed while helping her combat anorexia.

Patients were able to nominate a nurse whose care has had an enormous impact on their lives. Members of the public can vote for the final winner, who will be revealed on 6 May at the RCNi Nurse Awards held at Westminster Park Plaza Hotel, London.

Jade said: “Sarah deserves this award because she really cares for everyone she works with. She is the bomb.

“Sarah was always there for me, even in her own time. She would listen to me whenever I was upset. We would sit, talk and work through my problems for as long as it took. If I got really upset she would know how to calm and distract me.

“During meals – the most difficult time – she would ensure there was good conversation to keep us going and make sure everyone was ok and support us as best she could with prompts, distraction and kind words.”

Sarah made little cards for her patient so she could still support her when she wasn’t around. “That made things feel better,” said Jade. “When I was attempting home leave, Sarah wrote me little Christmas cards with supportive messages to read at milestones, such as changing trains. It was so helpful. I knew if I struggled to switch trains I could open a card and she would be pushing me to keep going.

“Now I'm an out-patient and she is still my keyworker, she emails even when she’s busy or not on shift. I don’t think anyone could deserve this award more.”

Sarah has been instrumental in supporting the #FREEthebutterfly Twitter campaign, which was created by her young patients as a way of lifting the stigma of eating disorders. She qualified as a paediatric nurse two years ago.

Sarah said: “I was speechless on hearing I had been shortlisted. A patient nomination is very humbling, especially when Jade found time while still undergoing her own treatment. It really means a lot to me.

“She’s never failed to amaze me with her strength, resilience, stubbornness, and incredible thoughtfulness. Being her key worker has been truly inspirational.

“I’m so pleased that the care we provide made a difference to her, it is why we are here. Being a nurse is a part of who I am and something I am passionate about and take great pride in.”