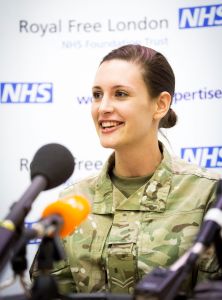 “I feel lucky” says Ebola patient as she leaves hospital

Anna Cross, 25, who was admitted to the Royal Free Hospital on 12 March 2015, has recovered from the Ebola virus and been discharged today.

Corporal Cross, from Cambridge, joined the Army Reserves in 2013 as a staff nurse. She volunteered to travel to Sierra Leone to help care for Ebola patients and arrived there in February.

She was treated in the high level isolation unit (HLIU) at the Royal Free Hospital. After careful consideration Corporal Cross said she would like to be given the experimental drug MIL77. She is the first Ebola patient anywhere in the world to be given this drug.

Corporal Cross said she was also grateful to the Royal Free Charity for giving her an iPad, which she used to watch David Attenborough programmes while she was in the HLIU. “I’m now looking forward to spending time at home with my family and friends,” she added.

Dr Michael Jacobs, infectious diseases consultant, said: “I’m very proud of the team and how hard they have worked over the past couple of weeks. We’re all delighted that another Ebola patient has made a full recovery.”

The Royal Free Hospital has the UK’s only HLIU, which is run by a dedicated team of medical staff.

The unit is designed to ensure staff can safely treat a patient with a dangerous infectious disease. Access to the unit is restricted and there are a number of measures in place to ensure the virus is contained.