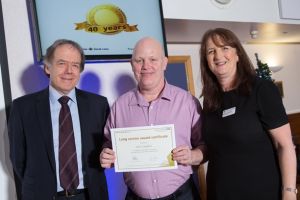 An engineer who has worked at the Royal Free Hospital for 40 years – and even helped with the construction of the building – has been honoured for his long service to the trust.

John Coughlan, a maintenance craftsman, first worked at the hospital in 1972, when he was employed as a plumbing labourer with a firm contracted to work on the construction of the building.

He was 15 at the time, and two years later John came to be employed by the trust and was here when the Queen opened the new building in 1974. The hospital had just moved from its previous location in Gray’s Inn Road.

John, a grandfather of three, was given his award by David Grantham, the director of workforce and organisational development, who praised his commitment to the trust and said: “I am very proud to give John this award. He has been so dedicated to the trust and I wanted to thank him for his hard work over the past 40 years.”

“When I first worked here, the hospital was a shell,” said John. “I started as a plumber’s labourer and have since risen through the ranks. Now I’m a maintenance craftsman, so I help with the plumbing, the fitting, electrics.

“This has been my home for 40 years. I’m local to the area – I’ve lived in Camden all my life. It’s an achievement to have been here all this time – I’ve never wanted to leave as I’ve enjoyed working with all my colleagues so much. I was thinking of retiring when I get to 60, however, I don’t think that I will because I really don’t want to leave.”

At a ceremony last Thursday John was among 94 people recognised for either 25 or 40 years of continuous service to the trust. Between them these members of staff have worked at the Royal Free London for 2,422 years.

David said: “One of the strengths of the Royal Free London is the consistency and experience provided by our staff who have devoted their working lives to this organisation. The long service awards are a fantastic opportunity to recognise this dedication and everyone I spoke to thoroughly enjoyed both the awards and the afternoon tea!