A former mayor of Barnet helped to celebrate the opening of Larch Ward as a dementia-friendly environment yesterday.

Brian Schama, who as Mayor of Barnet in 2012 donated £46,000 to dementia care at Barnet Hospital, said he was delighted with the way the ward had been transformed. 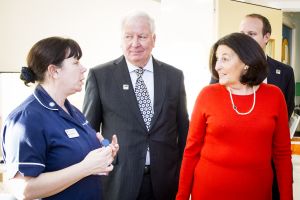 Larch Ward has three bays, each of which are clearly defined by a theme: beach, countryside and London. Different primary colours give patients a sense of place and create an environment that is easier to navigate. There are also skylights in each of the bays. The ward has enhanced lighting and signage, clearly visible calendars, day/night clocks and positioned grab rails. Wood flooring has been laid, as lino can appear wet or slippery to patients with dementia. The communal area has a ‘tip tree’ table in place, which is brightly coloured and set out with activities and drinks to help the patients stay hydrated.

It cost a total of £300,000 to transform Larch Ward and the idea was kicked off by the donation from the Mayor of Barnet’s charitable fund. Mr Schama said he knew the number of hospital patients with dementia was growing so it was important that they were given the right care. 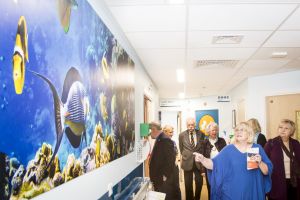 He said: “Back in 2012 25% of patients in hospitals had dementia and as we are all living longer this is a growing problem. So it’s been a real pleasure to see how the money raised has been so well used.”

Dr David Levy, service line lead for elderly medicine, said: “We are very thankful to Mr Schama for sparking this idea many years ago. It’s a pleasure to see it come to fruition. You can see how wonderful the ward looks and as they finished each bay it was clear the impact it was having. It’s a wonderful environment to be in – we have been getting lots of comments from patients and from their relatives about it and staff morale is at an all-time high.”