A former eating disorder patient has raised money for the children and adolescent mental health service (CAMHS) at the Royal Free Hospital. 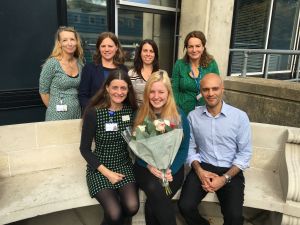 Nina Martynchyk has raised £712.47 for the Royal Free Hospital, at a conference about eating disorders in children and young people in September.

Nina said “I started to raise this money because I wanted to show how thankful I am to the staff at the hospital. For about six weeks they were there for me when everything was falling apart. They never left me alone and took me out to help with my recovery.

“I was so surprised by the kindness of people who all donated money to my cause at the eating disorders conference. My friends, former patients and staff at the Royal Free London (RFL) all came along to help.

“I have known the team at the Royal Free Hospital for about eight years, so this is my way of saying thank you for everything that they have done for me.”

Samantha Swinglehurst MBE, lead nurse specialist for CAMHS, said “Nina has an amazing story. She is incredibly brave and has worked so hard to raise this money. We’re going to put it to a vote so that the children can decide how we should spend the donation. It will be so helpful around Christmas time for the children and we are so thankful to Nina. It is great to see how far she has come.”