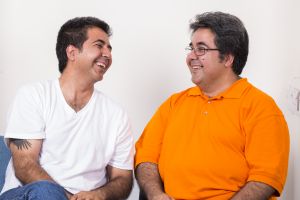 A teaching assistant taking part in a Royal Free London study into the genetics of Parkinson’s disease has described his shock and relief after discovering that, unlike him, his identical twin brother was free from the condition.

Peter and Paul Rodriguez, 47, were inseparable growing up and shared many coincidences throughout their lives.

“We were pretty much two peas in a pod; our friends couldn’t tell us apart,” said Peter.  “We had our tonsils removed at the same time, wisdom teeth removed at the same time. Whatever he had, I had. Once we took an exam, sitting at different ends of the hall, and our answers were exactly the same – the teachers were convinced we’d cheated somehow.”

So when Peter, from Enfield, was diagnosed with Parkinson’s disease at 44, his first thought was for his brother, who had moved to the USA 20 years earlier.

He said: “When I was told I had Parkinson’s I immediately thought of my brother Paul and whether he would be going through the same thing. I was extremely relieved when I found out he didn’t have it. If I could choose for one of us to have it I would want it to be me, and I know Paul feels the same about me.”

Now Peter and Paul have joined the Parkinson’s Families Project, which is led by Professor Huw Morris, consultant neurologist and professor of clinical neuroscience at the UCL Institute of Neurology at the Royal Free London.

While Parkinson’s is not usually hereditary, some gene variants have been strongly associated with the disease. Humans carry a large number of genetic variations across 20,000 genes so it is easier for Parkinson’s researchers to pinpoint the relevant variations when comparing family members with and without the disease. 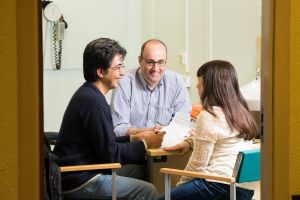 Professor Huw Morris said: “We are delighted to have the opportunity to work with Parkinson's patients and families at the Royal Free London. The participation of Peter and Paul Rodriguez and similar families is essential for our work. We are focussed on understanding the basic steps that lead some people to develop Parkinson's while others are unaffected. We hope that understanding these mechanisms will in time lead to new treatments that might halt this condition."

Peter, a jazz pianist who played with singer songwriter Amy Winehouse, said that in the past year his symptoms had started to have a significant impact on his life and that he now fears for the future.

“It started off as something that was a bit annoying and then started to affect my ability to do the things I really love, like playing piano.

“I worry that my wife married a husband but I married a carer. I worry for the future and the thought of a 4ft 10ins woman having to push me around in a wheelchair.

“I joined the research project because I wanted to help the doctors who were helping me. I also wanted to help stop other people experiencing this illness. If I have a chance to help eradicate this disease I can’t turn that down. I have accepted that I might not be cured but that I could do something that means that someone else might not have to walk in my shoes.

“There’s also a part of me that wants to find out why I have it and my brother doesn’t.”

The research team are interested to hear from people with a family history of Parkinson’s or who developed the condition before the age of 45. Please contact Manuela Tan, the study co-ordinator on 020 7794 0500 and ask for extension 37032, or email manuela.tan@ucl.ac.uk.