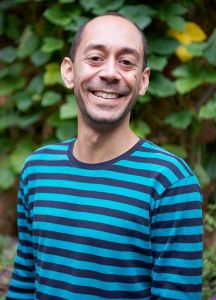 A Royal Free Hospital patient who has been living with human immunodeficiency virus (HIV) since 2007 has urged people to get themselves tested.

As the third annual National HIV Testing Week (NHTW) continues ahead of World Aids Day on 1 December, Public Health England has revealed that there are now nearly 110,000 people living with  HIV in the UK, with around 26,000 of these unaware of their infection.

NHTW is a targeted campaign aimed at encouraging those in groups disproportionally affected by HIV, such as men who have sex with men and African people, to consider taking a test.

Patients diagnosed with HIV can now expect a normal life expectancy – but only if they are diagnosed early and commit to the right treatment.

To support the campaign Ant Babajee, 36, who has been receiving care for HIV from the Royal Free’s Ian Charleson Day Centre (ICDC) since 2008, spoke to us about his experience of living with the virus and why it is so important to get tested.

“It is never going to feel ok getting an HIV diagnosis,” said Ant, who is also a campaigner and trustee of HIV charity the Terrence Higgins Trust. ”It is emotionally devastating. But I cannot tell you how important getting tested is. There is no cure for HIV but there is life-saving medication. HIV in 2014 is something that you can live with, and live with successfully.

“When I was diagnosed I cried with worry. But with the right support from centres like the Royal Free and support from HIV charities like Positively UK and the Terrence Higgins Trust you can really turn it into a very small part of your life.”

Ant said that while he understood that people might be reluctant to get tested due to the prejudice and myths surrounding HIV, diagnosis at any stage is always better than remaining in the dark.

He said: “I think there is still a huge amount of stigma around HIV. It is a fear of the unknown. People would often rather not know, and really that is the worst thing.

“But after diagnosis you can make sure that you can start medication when you need to and you can protect your sexual partners as well. But if you don’t know you have it you cannot do any of that.”
He added: “I cannot change what happened in the past, but by testing early I have been able to change how my future turns out.”

Current guidance states that those adults who have never had a test should do so immediately, while those people in higher risk groups should get tested at least annually.

Ant added that identifying those who are infected was essential to combatting the spread of the virus.

He said: “It is the people who don’t know they have HIV who are unwittingly driving new infections. As someone who is successfully on treatment – with what is described as an undetectable viral load in my blood – it would be almost impossible for me to pass on HIV to anyone else.

“To me it is an absolute no-brainer that the only way we are going to stop the spread of HIV is to get more people to test and to start treatment when they need to.”

Tom Fernandez, a nurse practitioner at the ICDC, said: “There is no question that starting treatment earlier is better than delayed presentation. Starting treatment early preserves the effective function of the immune system thus improving general health and wellbeing, and drastically reduces the risk of onward transmission. For many it offers the psychological benefit of actively doing something to control the illness and take control of their health.

“All treatments taken effectively have the capacity to control HIV. The work of the staff in ICDC is to choose the right treatment for each patient, support them in staying on treatment and make modifications, if needed, to keep the virus controlled long term.“

Photo of Ant Babajee courtesy of the Terence Higgins Trust and Annabel Vere.