This Stoptober a Royal Free Hospital patient has revealed how the shock tactics of his stop smoking advisor helped him quit cigarettes for good.

Despite suffering from severe respiratory problems David Kilshaw, 67, said he had no plans to quit smoking before he was referred to Christianna Kyriacou, counselling psychologist and stop smoking lead at the Royal Free Hospital. 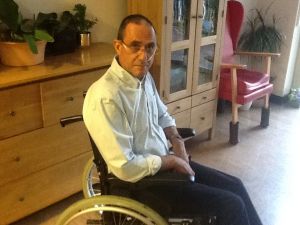 Diagnosed with chronic obstructive pulmonary disease (COPD) three years ago, David said he would occasionally stop smoking in order to relieve his symptoms. However, once he was able to breathe properly he would start again.

David, a retired palliative care nurse from Finsbury Park said: “I have smoked since I was 14 and had this grand idea of smoking right up until the end. I thought I would die with a brandy in one hand and a cigarette in the other.

“But Christianna pointed out that I already had COPD, which would get worse and I wouldn’t be able to do all the things I wanted to do in my retirement. I had all these travelling plans in place and I wasn’t going to be able to do any of it if I was stuck in a wheelchair attached to an oxygen tank.”

Christianna reinforced her message by giving David a bleak glimpse of his future if he refused to give up cigarettes.

David said: “Christianna took photos of me in a wheelchair with tubes and a tank and used Photoshop to make me look a bit more grey and thin. That really hit home. Every time I looked at that photo I was reminded why I was quitting. 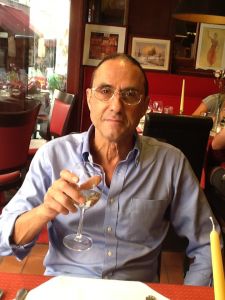 “She found the right reason for me to quit smoking. It wasn’t about saving money or anything like that; it was about me not being able to do all the things I wanted to do.”

Once he had the proper incentive, the smoking cessation service helped David quit by prescribing him an anti-nicotine medication and providing advice and moral support.

“I thought they were excellent,” he said. “Christianna recommended I take Champix, which reduced the cravings. She also helped me understand my smoking habits. For instance she knew that for me, coffee and smoking went hand in hand and helped me get to the point where I could enjoy a coffee without also needing a cigarette.”

“She was also just someone I could talk to. When I got the urge to smoke, even if it was only for a few seconds, I would send a text and get a few words of support. Sometimes it’s just about having someone telling you how well you’re doing and not to give up.”

Image 1: David in mocked up photo