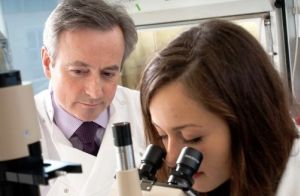 In groundbreaking work being carried out at the Royal Free London and UCL, mutations in a gene that significantly increases the risk for Parkinson’s disease (PD) will be used to develop new treatments to help slow down or stop its progression.

The project, coordinated by Professor Anthony Schapira, head of the department of clinical neurosciences at the Royal Free London, has attracted funding of €1.45 million (more than £1,200,000) from the EU and the Medical Research Council. Teams from Germany, Italy and Canada will also be assisting.

Changes in the glucocerebrosidase (GBA) gene are found in around 10 per cent of patients with Parkinson’s, representing the most important risk factor for the disease. Carriers of the mutation have a significantly increased risk of developing Parkinson’s, although not all will do so.

Research shows that the mutations lead to early changes such as loss of smell and subtle movement problems which, together with alterations in blood and spinal fluid, are being used to identify the group most at risk of developing the disease among those with the GBA mutation.

“Even Parkinson’s patients without this mutation show changes in the activity of the GBA enzyme in the brain. This means that some of the lessons learnt from GBA carriers may be applicable to patients in general, which is particularly important in developing therapies that might be relevant to all Parkinson’s patients.

“We’re studying a large cohort of GBA mutation carriers to track the evolution of Parkinson’s from its earliest stages before diagnosis and to identify those at most risk.”

The researchers are also studying how GBA mutations cause Parkinson’s and have already identified a potential new drug to combat the mutation that has shown promise in tests and will be used in a clinical trial in early 2016.

This funding is through the EU Joint Programme, Neurodegenerative Disease Research (JPND).