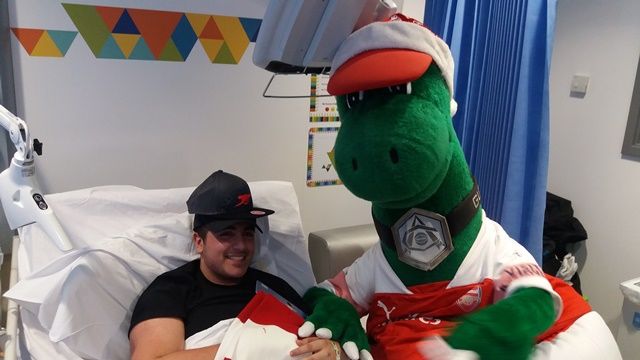 Arsenal mascot Gunnersaurus thrilled his young fans with a back-to-back trip to the Royal Free Hospital and Barnet Hospital.

The dynamic dino first took to the children and neonatal wards at the Royal Free Hospital and later headed north to Barnet Hospital to spread his special brand of red and white festive cheer.

Delighted to see him was 17-year-old and huge fan Raffaele Sordillo who had been rushed into hospital the previous evening. Gunnersaurus wasn’t a fan of the hat he was wearing and promptly covered it with an Arsenal cap instead!

Raffaele said: “I wasn’t expecting this but it’s a fantastic surprise. I’m about to go home but this has made my day. Arsenal are doing so well at the moment and I’ve been to a lot of the games this season. Meeting Gunnersaurus is a big deal for any fan.”

Eleven-year-old Anas Gaya was also keen to get close to the famous green dino.

He said: “I can’t stop smiling. Arsenal have had 21 wins on the trot so as a fan that’s brilliant but meeting Gunnersaurus makes it even better. It’s a good time for us fans.”

Gunnersaurus also paid a visit to the Royal Free Hospital’s neonatal ward and met six-week-old Matilda and mum, Emma. Matilda slept through the whole thing but Emma said she wouldn’t forget the visit in a hurry.

She said: “It’s not every day a giant green dinosaur comes visiting!”

After selfies and cuddles with staff it was time for Gunnersaurus to get going.

At Barnet Hospital it was high-fives all round with D’Angelo Camelo chuffed to bits to receive a game of ‘Guess Who’ from the one of the most famous Gunners.

Whilst eight-month old baby James Deacon couldn’t stop smiling and stroking the dashing dino and six-year old Elspeth Efrem took to following him round the ward.

She said: “It’s brilliant, I’m so happy to have met the green dinosaur”.  She even managed a cheeky tug on his tail.

(PIC: Hats the way we like it: Gunnersaurus meets super fan Raffaele Sordillo)