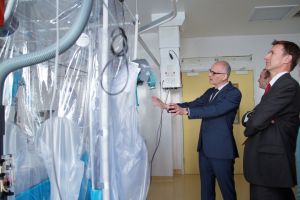 Mr Hunt said he was “proud and humbled” after speaking to the doctors, nurses and support staff who helped to cure healthcare workers William Pooley, Pauline Cafferkey and Corporal Anna Cross.

The Secretary of State praised the hospital’s infectious diseases team for being at the forefront of the global fight against Ebola and for setting the tone for how clinicians around the world should fight the disease.

He said: “It is fantastic that the best of the world is here at the Royal Free Hospital. Three patients were given the best possible chance of survival because of the level of excellence you have here.

“You should all be proud of having something here that people all over the world look at and say ‘what they are doing is incredible’.”

He added that the hospital’s “business as usual” response when receiving and treating each Ebola patient had been vital to the government’s efforts to reassure the British public.

He said: “[Prime Minister] David Cameron also sends his thanks. The risk when you have something like Ebola, and the possibility of it arriving in the UK, is that you could have mass panic and hysteria. But the professionalism that people saw and the calmness of your response had a very reassuring effect on the general public. People saw your response and thought ‘this is something that we can cope with’.”

During the tour Dr Jacobs said that over the past 11 months the Royal Free Hospital had become a world leader in the research and treatment of Ebola.

He also stressed the advantages of the hospitals’ unique HLIU, over the personal protective equipment suits used by health workers treating infectious diseases around the world.

He said: “Having had experience of both I know that this is a much better system. The suits are very challenging, both because of the heat and also because of the danger of having to take off the suits after you have finished looking after the patient; because it is contaminated.

He added that the team had developed a new style of protective suit, which is designed to reduce the chances of infection, and is now the global standard.

The treatment of the Ebola patients required the HLIU to operate as a “hospital within a hospital” and saw staff including, doctors, nurses, pharmacists, engineers and cleaners working around the clock until each patient was given the all clear.

Speaking to several HLIU staff today, Mr Hunt said: “I feel incredibly humbled at the courage people show when they decide to go into medicine. You are dealing with life and death every day, and you are taking risks every day. And the work you are doing in the HLIU really brings that home.

“You represent the nature of people who work in the NHS. To have people work in a room with someone with one of the most infectious diseases known to man, and to do so with no shortage of volunteers says a lot about the people working in the NHS.

“Thank you. You made us feel very proud.”

Professor Powis said: “What’s really important is to let the minister know the huge amount of effort that went into the treatment of our Ebola patients from the wider team. I’m incredibly proud of you. I was privileged enough to see you working and it was really the NHS at its best.”

The HLIU is run by a dedicated team of doctors, nurses and laboratory staff from the department of infection. Access to the unit is restricted to these specially trained medical staff. The HLIU is designed to ensure our medical staff can safely treat a patient with a dangerous infectious disease such as Ebola. A specially-designed tent, with controlled ventilation, is set up around the patient’s bed and allows the staff to provide clinical care while containing the infection. There are various facilities in place, including a specific entrance for the patient, sterilisers which de-contaminate waste and a dedicated laboratory for carrying out tests, all of which help to ensure the patient can be treated safely and securely.