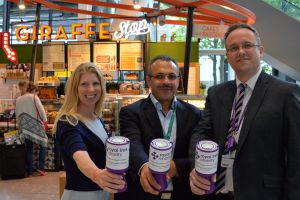 Passengers eating, drinking and flying into Heathrow Airport in August will be helping to fight pancreatic cancer, with food and beverage retailers across terminals and air traffic controller NATS uniting forces to contribute to medical research at the Royal Free London NHS Foundation Trust (RFL).

The Royal Free Charity, which raises money for research and patient care at the RFL’s three hospitals, will collect funds for research into pancreatic cancer, including finding new methods of diagnostic testing and the creation of an artificial pancreas using stem cells.

Pancreatic cancer is currently the most underfunded, and has the lowest survival rates of all cancers in the UK.

Passengers will also be offered the opportunity to add an additional contribution of their own to their bills at certain retailers, via 500 collection boxes throughout the terminals and through a Just Giving page for the event.

Heathrow’s fundraising drive was organised by Calvin Cummings, operations manager at Heathrow Airport, after his wife Becky was admitted to the Royal Free Hospital’s hepatopancreatic biliary unit in the Sheila Sherlock Liver Centre with an extremely rare form of pancreatic cancer.

Calvin said: “With August set to be Heathrow’s busiest month this year and so many of our retailers willing to participate, there is a real opportunity for our passengers to make a real difference to pancreatic cancer research. I have seen first-hand the dedication and care of the Royal Free Hospital’s staff, and I know this is a very worthy cause that will impact the lives of a lot of people.

“I have always been proud to work at Heathrow, but am more so today with so many of our partners stepping up and finding generous ways to contribute.”

Diane Ryan, fundraising manager at the Royal Free Charity, said: “Pancreatic cancer has the lowest survival rate of all the cancers and is one of our priority areas for support.

“Our aim is to make sure that together we are able to fund research projects that will improve outcomes for patients diagnosed with this disease. Pancreatic cancer research is severely underfunded compared to other cancers, but researchers and patients need that funding so that bespoke tests and treatments can be developed.

“One reason pancreatic cancer is so difficult to treat is that it rarely causes symptoms in its early stages, and so is rarely detected until it is fairly advanced. So we are funding research into diagnostic tests that could enable earlier diagnoses by GPs.

“The generosity and support of Heathrow staff and passengers in helping us fund research is a real opportunity to change lives and boost survival prospects in the future.”

To donate to this fundraiser and to learn about Becky’s story, visit her the Heathrow Airport Just Giving page.

The Royal Free Charity at The Royal Free London exists to support, above and beyond, the NHS provisions for staff and patients. We provide the ‘Little Touches and Big Differences’.

Last year the Royal Free Charity’s income was £15million which enabled us to provide additional services such as volunteer services, including dementia support companions and complementary therapy massage for cancer and renal units as well as funding research and the Institute of Immunity and Transplantation.