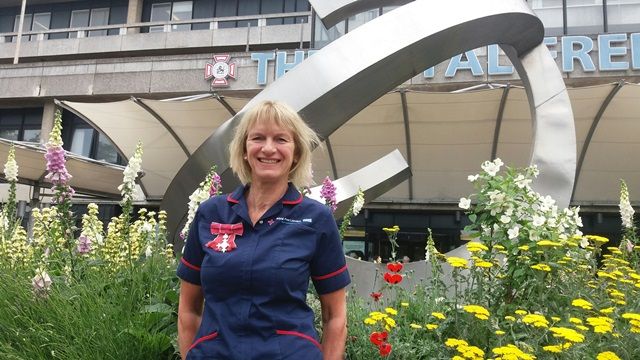 The achievements of a Royal Free Hospital matron who showed ‘outstanding leadership’ during the Ebola outbreak in 2015 have been recognised by the Queen.

Breda Athan was awarded an honorary MBE by the Minister of State for Health, Steve Barclay, on behalf of Her Majesty, The Queen. The ceremony took place at the Department of Health and Social Care this week.

Mr Barclay praised Breda’s “outstanding leadership on infectious diseases” and described her as an “extraordinary woman”. Breda is lead matron of the high level isolation unit at the Royal Free Hospital, where patients with the most dangerous infections are treated.

Mr Barclay said: “The role you played during the UK’s response to the Ebola outbreak in West Africa was invaluable and critical in both managing the patients treated at the Royal Free Hospital and in developing the UK’s readiness for further patients.

“You have developed unrivalled expertise in this field and your knowledge and experience of treating high risk infectious patients is quite simply unsurpassed in the NHS and developed world.”

The Minister of State also paid tribute to Breda’s work as the Ebola outbreak developed. She took on a national leadership role to ensure that other NHS facilities benefited from the Royal Free Hospital’s best practice.

He said: “You led by example and played a central role in the direct nursing care of all three Ebola patients treated at the Royal Free, who made a full recovery under your dedicated care.”

Breda’s work in establishing a training programme for the use of personal protective equipment was also praised and similar training programmes have subsequently been extended to nursing staff elsewhere in the NHS.

Mr Barclay commended the work Breda had done to improve services across the NHS, including providing assistance to colleagues from Newcastle to help them re-establish their high level isolation unit.

He said: “These contributions were all vital in ensuring that the UK was prepared for the possibility of managing an increased number of Ebola patients simultaneously.”

He also paid tribute to her work in helping to set up and run a nurse-led travel clinic at Coppetts Wood Hospital, Haringey, location of the original high level isolation unit, one of the first of its kind in the world at the time.

The Minister also pointed out that while a lot of Breda’s invaluable work had focussed on infectious diseases and how to manage them effectively, she had also volunteered to participate in the ground breaking research project Xtreme Everest2, forming part of a group of experts and scientists who climbed to Everest base camp in a research project aimed at investigating hypoxia and bringing benefits to patients with low levels of oxygen in intensive care.

He concluded: “The contributions highlighted are a testament to Breda’s fierce dedication to bettering the lives of patients and ensuring that the UK continues to develop and improve its preparedness for and management of infectious diseases.”

Breda, who lives in Enfield and grew up in Ramsgrange, a village in County Wexford in the south east of Ireland, said: “It was an absolute honour to receive this award but it wasn’t just for me. I had an amazing team around me and this award celebrates what we all achieved.”

Sir David Sloman, Royal Free London group chief executive, said: “Huge congratulations to Breda for this well-deserved award. Breda was instrumental in the Royal Free Hospital’s response to the Ebola outbreak and we are incredibly grateful for her contribution to the life blood of our organisation.”