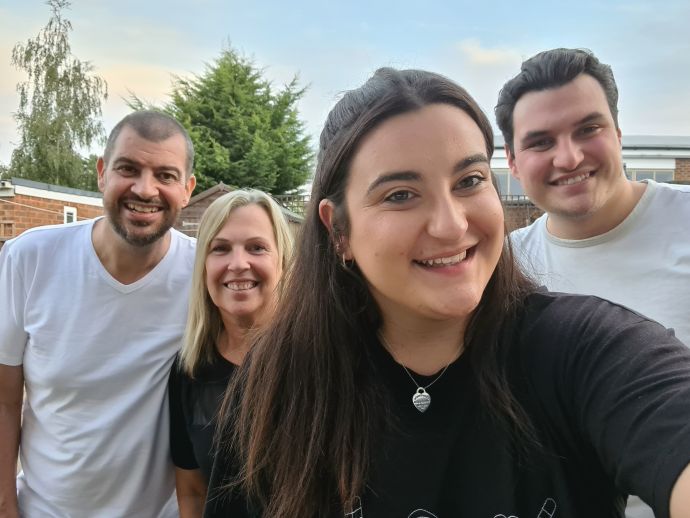 While the attention of the world has been focused on coronavirus, for one man receiving a life-saving liver transplant was his health priority.

Kevin Higgs, 52, a father-of-two from Croxley Green in Hertfordshire, says he is still counting his blessings after undergoing a successful liver transplant at the Royal Free Hospital (RFH) in May.

But now the immunosuppressant drugs Kevin has to take so his body doesn’t reject the new liver mean he’s more vulnerable to infection, including COVID-19, so he’s still shielding at home.

Kevin admits when he was diagnosed a year ago with liver problems it came as a complete shock. Kevin had played football into his 30s. He describes himself as a social drinker and certainly didn’t see himself as a candidate for cirrhosis of the liver.

He said: “I never thought of myself as dependent on alcohol. I liked a couple of beers after work and wine with dinner as much as the next person but as soon as I was told by doctors there was a problem last year I hoped that abstaining completely from alcohol would enable the liver to repair itself.

“My wife, Elaine, was diagnosed with cancer and although she’s now had the all clear it was quite a stressful time and I probably did drink a bit more than usual in 2018.”

At the beginning of this year Kevin and Elaine decided to treat themselves to the holiday of a lifetime in South Africa. But during the holiday Kevin’s energy levels dipped and he felt unwell.

He said: “I could feel something wasn’t right while I was away and when I came back I went straight into Watford General Hospital – I wasn’t tanned – I was jaundiced and looking very yellow.”

The second time Kevin was admitted to hospital, new visitor restrictions due to COVID-19 meant he wasn’t able to see friends or family in person during this stay.

He said: “I didn’t find it too onerous as I could still FaceTime my family and I suppose I had other things to worry about than COVID-19.”

After a couple of weeks in the RFH he was discharged home.

But not long after Kevin got the call that a donor liver was available.

As his transplant took place his daughter Sophie turned 21. During the procedure he was allowed to hold the locket his daughter had given him which had the inscription, ‘I’ll always be your little girl and you’ll always be my hero!”

Kevin said: “It was my lucky charm, we’re a very close family and it meant everything to me to have that with me.”

As soon as he came round Kevin felt well enough to make a Skype call to his family, including his 23-year-old son Charlie and it wasn’t long before he was back to the same ward where he’d been cared for before the transplant.

He said: “I can’t thank the nurses and doctors enough who cared for me and my surgeon, Mr David Nasralla, who kept in checking in with me afterwards. I was buzzing, I couldn’t believe how well I felt. I hardly needed any pain killers. It wasn’t long before I was walking laps up and down intensive care. I think it was possibly harder for my family than for me because I was always so busy – there was the next scan or next hurdle to achieve.

“I’m extremely grateful to the person who donated their liver and their family. Without that person I wouldn’t be sitting here and I hope that gives them some comfort and I want them to know it’s not being wasted. I’ve lost a lot of weight, I’ve got a whole new wardrobe and I’m enjoying life. I’ve got a way to go but I know I’m a very lucky guy.”

Dr Aileen Marshall, consultant hepatologist at the RFH, said: “The COVID pandemic had a significant impact on liver transplant services across the country, especially during March and April, when the number of donor livers fell to less than 20% of normal. All the UK liver transplant units remained open and worked together to ensure that patients with very severe liver disease, like Kevin, could still have the opportunity to receive a life-saving transplant. The whole transplant team is delighted that Kevin has recovered so well. More than ever, we are grateful to donors and their families for taking the time to consider organ donation. Without them, transplantation would not be possible.”