Stars of the stage and screen turned out last night to celebrate the 25th anniversary of the Ian Charleson Day Centre (ICDC), the first clinic in the UK to provide care for people with AIDS and HIV. 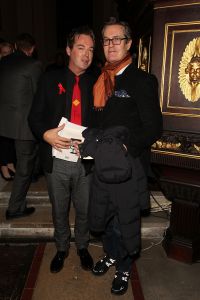 The event, at the Actors’ Church in Covent Garden, was hosted by comedian Julian Clary. Actors Sir Ian McKellen, Rupert Everett and Jack Lowden also appeared to pay tribute to the ICDC and Professor Margaret Johnson, who set up the clinic 25 years ago.

The ICDC was named after Chariots of Fire actor Ian Charleson, who died of AIDS in 1990. Based at the Royal Free Hospital, it was the first open-access clinic for people with AIDS and HIV to be opened in the UK and the centre currently cares for 3,000 HIV patients.

At last night’s event, Ian McKellen, who was a friend of Ian Charleson, remembered the performance Ian gave as Hamlet as his health was fading: “His lungs were impaired and it was a near miracle – but it was exactly the performance he wanted to give had he been completely well.”

Professor Margaret Johnson spoke about the challenges that still exist for people with HIV: “When the centre opened, 10% of patients died. Now a patient can have a normal life expectancy,” she said. “But sadly this is not the end of the problem. There are many young people who are getting infected with this virus. Some have long-term problems, including an increased risk of renal disease and increased risk of many cancers.

“That’s the challenge going forward – when will there be a cure? The ICDC has always been at the forefront of HIV research in the UK and now we are taking this into a new era with the UCL Institute of Immunity and Transplantation. We are just about to start our first cure study.” 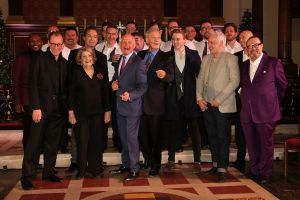 David Sloman, chief executive of the Royal Free London, said: “We are here because we all value so highly the work of the staff at the ICDC and the extraordinary care it offers to those living with HIV. And although health care is always about teams, we are also here to acknowledge Professor Margaret Johnson’s enormous personal contribution to the ICDC and the patients it serves.

“So thank you to Margaret Johnson. This clinic and the care that has been provided over the past 25 years is a phenomenal achievement. Congratulations to everyone who has been a part of the journey.”

Images: Top, Julian Clary with Rupert Everett and bottom, the performers gathered at the church.