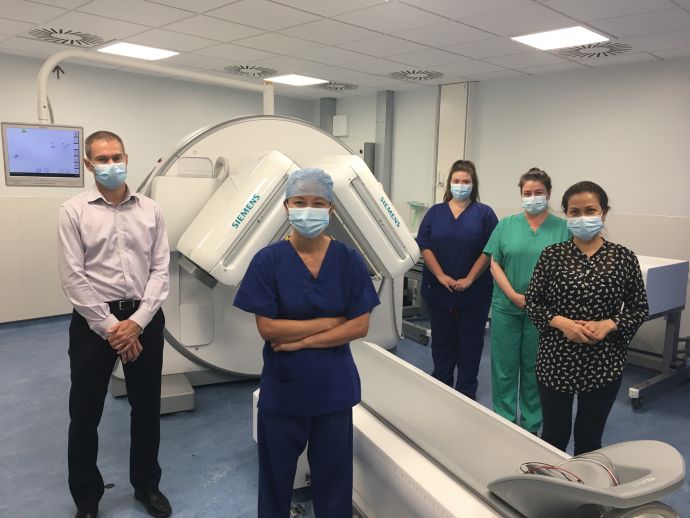 Doctors at the Royal Free Hospital are looking at whether a scan can be used to diagnose kidney cancer – allowing patients to avoid undergoing an invasive biopsy.

Kidney cancer affects more than 13,000 people in the UK each year but currently the only way to confirm if a kidney tumour is benign or cancerous before surgery is to have a biopsy - which involves a long needle being inserted through the skin into the tumour to take a tissue sample for analysis. A study is now taking place to see if a scan could be just as an effective diagnostic tool.

Michael Webber, 69, from Winchmore Hill, north London, was diagnosed with a small kidney tumour in 2017. A subsequent biopsy showed it wasn’t cancerous but the biopsy itself caused bleeding and meant Michael had to return to hospital as an emergency case for further treatment to repair the damage.

Four years on Michael’s tumour had grown to a point that his doctors wanted to treat it as they were concerned about it causing complications the bigger it got and because it is so close to important blood vessels. But first they wanted to double check again that there was no cancer.

Michael said: “I was in the one per cent of people who experience a problem due to the biopsy and I was keen to avoid having another one if possible ahead of the procedure to remove my tumour. I think this could make a big difference to patients like me who don’t have cancer but have a bad experience with the biopsy.”

A biopsy needs an injection of local anaesthetic, and can have side-effects such as pain and bleeding, which is what Michael experienced. Patients also worry about potential ‘spillage’ of tumour cells from the biopsy site into surrounding tissue. Many hospitals do not even offer renal tumour biopsy, so many patients go straight for surgical removal of the tumour.

Now in the first study of its kind in the UK, doctors at the Royal Free Hospital, the UK’s largest specialist kidney cancer centre, are investigating if, instead of a biopsy, a nuclear medicine scan known as a sestamibi scan can be used to detect if a patient’s kidney tumour is benign and requires no further treatment.

As up to three in 10 kidney tumours are found to be benign – using a scan for diagnosis instead of an invasive biopsy could have a huge impact on patient care and will free up theatre space for other patients.

Small studies from the USA and Sweden have already indicated that the sestamibi scan can distinguish renal cancer from benign tumours. Sestamibi scans have been used for over 30 years  in the NHS for other diseases such as parathyroid and heart imaging and are known to be very safe, painless and are widely available.

Adult patients diagnosed with a renal mass larger than 2cm are now being invited to participate in the study by having a sestamibi scan prior to their scheduled biopsy or surgery.

Dr Maxine Tran, consultant urological surgeon at the Royal Free Hospital, associate professor in renal cancer and principal investigator for the study, said: “The identification of kidney tumours is increasing partly due to developments in detecting the disease but currently there is no proven scanning method to identify if the tumour is benign or cancerous and the only diagnostic option is a biopsy. However, not every hospital offers this and of course every invasive procedure whether a biopsy or surgery comes with risk. This is why research into the effectiveness of using this scanning method is potentially so exciting and could lead in the future to far fewer biopsies and unnecessary operations taking place.”

Dr Thomas Wagner, consultant in nuclear medicine at the Royal Free Hospital, added: “The sestimibi tracer is taken up by mitochondria in cells. Oncocytomas (benign tumours) contain many mitochondria, so the sestamibi tracer is taken up by those cells and they look 'hot' on the scan. However renal cancer cells have less mitochondria and also have little pumps that get rid of the tracer, so they don't light up on the scan.  We have lots of experience doing these type of scans, they are very safe and easy to do so this new application for the scan, if shown to be effective, could easily be rolled out across the NHS.”

If the initial pilot is successful the study will be expanded to become a multi-site study, to see if other hospitals can offer it to benefit more patients. The pilot study is being funded by the Royal College of Surgeons of England, St Peter’s Trust and the Royal Free Charity.