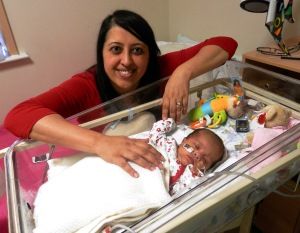 The UK’s first care rooms that allow parents to stay close to their premature babies 24 hours a day have opened at the Starlight neonatal unit at Barnet Hospital.

The rooms – known as individualised care rooms – allow a newborn baby to receive care and treatment in a private, family-centred setting. The rooms can support a newborn baby’s brain development by limiting extraneous light and noise.

The rooms have space for parents to stay with their newborns 24-hours a day, allowing them to play a central role in the care of their child. Each room is staffed according to the baby’s needs providing 24/7 support to parents.

Centres across the United States and Europe are increasingly adopting this approach, but Barnet Hospital offers the first neonatal single-room design of this type in the UK. And the Starlight unit now has 10 rooms which offer this kind of care. Previously premature babies were cared for in a traditional, open ward.

Karina Wyles, senior matron, said: “The rooms enable parents to learn a sense of parenting control, to provide prolonged episodes of skin to skin care and to get to know their baby, within a calm, private setting.”

Hina Parmar’s daughter was looked after in an individualised care room after being born 15 weeks early.

She said: “My daughter Maya was born at only 25 weeks and we spent two months in intensive care at another hospital before being transferred to the Starlight unit at Barnet. We have had the opportunity to stay in an individualised care room and it is fantastic.

“Before, I would come to the hospital in the morning and go home in the evening, but this unit enabled me to be with Maya for 24-hours a day and to do everything for her, with the added bonus that a nurse is available outside at all times for support. I think that more hospitals should adopt it.”