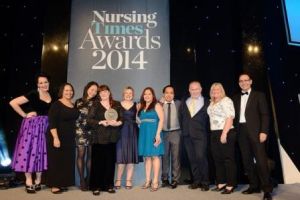 The Royal Free London’s infection control team has won a national Nursing Times award for their important work in investigating how an antibiotic-resistant bacteria can spread.

The team was named winner in the infection prevention and control category at an awards dinner in central London last night.

The infection control team were recognised for a survey they carried out, which examined whether patients at the Royal Free Hospital were at risk of infections due to the antibiotic resistant carbapenemase-producing enterobacteriaceae (CPE).

The survey, which was led by Janice Scott, infection control nurse specialist, also looked at whether screening patients was cost effective and the prevalence of the infection in the patient population.

According to the Nursing Times’ judges, the team's investigation is of national importance and their findings are now being used to inform Public Health England’s guidelines on controlling the infection.

Yvonne Carter, infection control lead for nursing, said she was delighted the team had won the award.

“I am so proud of what the team has done and am so pleased our work has been recognised by the judges,” she said. “No other trust has carried out an investigation like this and this is an example of how the Royal Free London is a trust that leads, rather than follows.

“It is important that we carried out the survey because it can help us stop this infection spreading. It is resistant to all antibiotics and so if we can’t cure it we have a duty of care to prevent transmission.”

Deborah Sanders, director of nursing at the Royal Free London, added: “Congratulations to the team, I am really pleased they’ve been recognised for their work. This investigation is hugely important and the results will go on to inform national guidelines and will be of use to hospitals across the country."

The team were awarded after making a presentation to a panel of judges, explaining their work.

A total of 20 awards were handed out at the awards ceremony, held at the Grosvenor Hotel in Mayfair, last night.