The Royal Free Hospital (RFH) is home to the UK’s only high level isolation unit (HLIU), where patients with dangerous infectious diseases such as Ebola can be safely cared for. 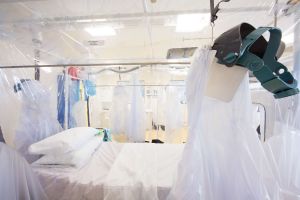 The unit contains two Trexler isolators – large plastic tents which fit around the patient’s bed. As long as staff follow strict protocols, the isolators mean the infection can be contained. Between August 2014 and March 2015 three nurses who contracted Ebola while caring for patients in Sierra Leone were flown to the UK and treated in the HLIU at the RFH, where they all made full recoveries.

However, long before the Trexler isolator was developed, the RFH had gained an international reputation for treating patients with infectious diseases.

The Royal Free was founded in 1828 and during its first few decades hospital staff cared for thousands of cholera patients. It was the only hospital to remain open during the cholera epidemics in 1832, 1849 and 1854.

As the Royal Free expanded over the next century, its reputation for the management of infectious diseases grew. Three hospitals, the London Fever Hospital, the Hampstead Smallpox Hospital and Coppetts Wood Hospital, which were founded for the treatment of infections including smallpox, scarlet fever and diphtheria, became part of the RFH group.

When it was acquired in 1947, the London Fever Hospital was re-named the Royal Free Hospital, Liverpool Road Branch. By then the hospital was no longer used for treating patients with infectious diseases. However, in 1955 was once again used for patients caught up in an ‘outbreak.’  Around 300 members of the Royal Free’s 3,500 staff were treated there after being struck down by a mysterious illness. Both the Gray’s Inn Road building, where the main RFH was then situated, and the Liverpool Road site, were quarantined for several weeks. Some doctors thought the disease was a form of encephalomyelitis while others regarded it as mass hysteria. 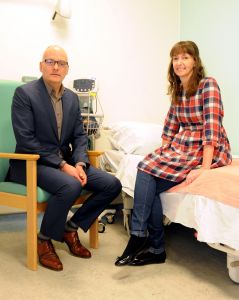 It was then that the Trexler isolator tent was developed. Inside the tent the air pressure is lower, which means air always flows from the outside in. This helps to contain the infection and protects the staff.

The Trexler isolator was first used in the treatment of a patient with the Ebola virus in the 1970s when a researcher at the government research facility at Porton Down accidentally pierced himself with a syringe needle.  He made a full recovery thanks to the care of infectious diseases experts who treated him while he was in the isolator.

By 2000 most of Coppetts Wood Hospital had closed and the infectious diseases department moved to the RFH. The high security infectious diseases unit remained at Coppetts Wood until it moved to the RFH in 2008 where it was renamed the high level isolation unit. Five patients with viral haemorrhagic fevers, including three with the Ebola  virus strain of haemorrhagic fever, have been treated in the HLIU since then.

William Pooley, who was the first Ebola patient treated at the RFH, praised the staff who cared for him and said: “I've got nothing but praise for the level of care, skill, compassion and kindness I've received here. It's been amazing.”

Pauline Cafferkey, the nurse who was admitted to HLIU at the RFH in December 2014 after being diagnosed with Ebola also paid tribute to the staff and said: “They were amazing. They were always very reassuring and I knew I was in the best hands. They saved my life.”

Army reservist Corporal Anna Cross was the third Ebola patient to be treated in the unit. She made a full recovery and was discharged from the RFH in March 2015.

Dr Michael Jacobs, infectious diseases consultant, said: “It can be very challenging to treat patients in the HLIU. There are strict protocols that we must adhere to and all staff are given a high level of training to ensure we can safely treat a patient in the isolator.

“We are very pleased that in the past year we safely treated three patients with Ebola. Thanks to the skill and hard work of the staff, the patients all made a full recovery.”